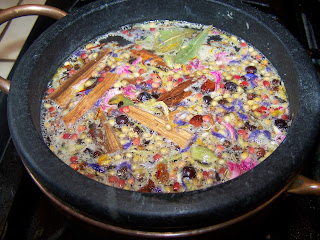 UPDATE: Here is everything in a pot with a bottle of white wine. I think it ill be good. Sure is beautiful. Nouveau Conditum Paradoxum.

To illustrate how to administer a taste test and develop some statistically significant data to my food policy class, I emptied out the spice drawer the other day and had them sniff and taste a wide variety of spices. Admittedly some were pretty obscure, and I anticipated that a few spices no one would get. Medieval cassia buds I don't think anyone would recognize nowadays, though the taste should be familiar, even to 18 year olds.

The hypothesis I was testing was whether US born students would have less experience using or seeing whole spices than foreign born students, of which I have a lot in this class. It's not exactly a question of deskiling since few have a lot of experience in the kitchen, but merely familiarity with ingredients and what they look like whole. Or at the very least smell and taste recognition, since many of these they definitely would have eaten before.

There were 18 students and 25 spices. The average number of correct answers in the class was 3. The highest score was 7 and the lowest 1. Not surprisingly 14 (77.7%) recognized a pepper corn. And 16 (88.8%) recognized a cinnamon stick. It was true cinnamon, incidentally. But the numbers fall off dramatically after that. Only 9 (50%) could recognize (by taste and sight) chili flakes, even though they came out of a pizzeria packet. 3 (16.6%) identified cloves. 2 (11%) knew star anise, though they were broken, so maybe that threw people off. 2 knew fennel seeds. And only one person in the class (5.5%) could name one of the following: juniper, bay leaf, Sichuan pepper. None one could identify vanilla, which really surprised me, or mustard seeds, or coriander, cardamom or saffron. Or even nutmeg.

Obviously we were dealing with much too small a statistical sample to be significant, but the highest scores were indeed from foreign-born students. Expectedly, the Chinese students recognized things more common there, like star anise, Sichuan Pepper corns and chili, and one got 5 correct, a Student born in Mexico recognized the highest number (7), with a few names in Spanish, but that's fine. The Korean students and an Indian student scored about the same as everyone else. But not suprisingly, American students did the worst on this. I'm not sure what it proves beyond inexperience in the kitchen, which I knew was the case, but even inexperience with flavors and knowing what they look like. They were all surprised when I told them the long shriveled black thing was vanilla; they could recognize the smell but not name it. Remarkable huh?
Posted by Ken Albala at 1:50 PM

I don't know. WHen I was in college, before I cooked (BIC) I would have done just as badly. I wouldn't have known sichwan or star anise for sure. After I started cooking the world opened up. I'd like to think I could recognize a zillion now.

Still, the world is a different place for today's students and much more cosmopolitan. You'd think kids would know more.

BTW, I once went on a mighty search for cassia buds years ago. There were devilish hard to find. I love them and use them to make a very delicious marinade -- I actually like them better a few years old–– aged you might say.

A testimony to how few young people cook or even have exposure to people who cook, "from scratch".

To some degree, this is an age-based phenomenon as Deana points out. However, from our generation (50-something) to this generation many skills have been lost because of the rise of packaged, fast, convenience and pre-prepared foods.

Of my own accord, I don't label my spices or mixtures (leftover from a fresh prep). I find things by location, pattern-recognition (what it looks like) and smell. Every now and then my husband convinces me to label a few jars so he can navigate the cabinets, but that is not a common occurrence.

I have a vanilla orchid growing upstairs right now - no flowers yet though!

Oh and Thanks Deana, the flowery pepper mix is in here too, as you can see.

I don't know. WHen I was in higher education, before I prepared (BIC) I would have done just as poorly. I wouldn't have known sichwan or celebrity anise for sure. After I began food preparation the globe began out up. I'd like to think I could identify a million now.
Gold On Runescape
Diablo 3 Gold
buy aion kinah