In 2025 the streets of New York City had become so deplorably crowded that the city planners had decided to implement new technologies designed to drastically reduce motorized traffic. Their goals were twofold, both to minimize carbon emissions and to force people to walk rather than rely on cars, cabs and busses. This would both clear the streets and complement the mayor’s new fitness initiatives.

The largest obstacles, as they envisioned them, were how the sidewalks could handle the added foot traffic, how they could keep pedestrians moving quickly to their destinations and how a navigation device could be employed for people who had increasingly forgotten how to get around on foot. They decided that using a GPS device on a phone would be inexpensive and easy, but ultimately would cause people to bump into each other, or worse, wander into traffic while their heads were staring at their phones.  Spoken directions would only be worse since there would be a cacaphony of voices in the street, leading to confusion. In fact they ruled out most current electronic technologies, all of which depend on an inadequate interface. Think of the absurdity of a complex brain communicating through a keyboard invented in the 19th century. They wanted something much more primal, tapping into the instinctual drives of the human brain, the hard-wired tracking instinct. They decided to rely on smell.

The device, called the Olfactigation Module, was pretty simple: two small jets were positioned on each forearm, about the size of a wrist watch. A global mapping system gathered information based on current location and desired destination. It then set a clear and rational path and guided each individual by means of a very precisely coded smell. A thin stream of colored gas basically set a lane for each individual to follow. Each person had a particular smell engineered to communicate directly to their neural cortex, unique to that individual. No two smells were alike. Essentially each person just walked, stayed in lane and followed their nose.

The complexity of the system was that no one would even have to worry about bumping into others, or even wait for traffic lights. Those would be abolished. The city, being sanitized of car fumes, now became the perfect spot for a smell-based navigation system. Even smoking was banned outright. The system would direct each person, setting the pace, direction, marking the turns clearly. The gas dissipated a second after each person walked past it, so there was little possibility of aromatic overload or pheromone confusion. The really brilliant part was that you were directed not to a street address, but an exact spot within a couple of inches. Every single space in the city was given a precisely mapped point. So you could end up at the cracker aisle in a particular grocery store, in your dentist’s chair for an appointment, then back at your desk without every thinking about where you were going. Without every worrying about bumping into anyone on the way somewhere.

The system also recorded the whereabouts of everyone in the city, so you could find out, for example, that the person you planned to meet is six blocks away and will arrive in precisely 10 minutes. Eventually they also realized that there are slower and faster people, so they designed different lanes, and even some very fast lanes so people could run wherever they liked. No one had to worry about traffic and eventually the street surfaces were one by one closed to cars and became wide pedestrian lanes. Of course people sometimes needed to go across town, so the Olfactigation system led them onto the subway lines, which were now free as well as part of the system, so you never had to worry about how to get anywhere, your own individual navigatrix would lead your every step, right onto the subway car, planning any switches and taking you right your destination. People really loved it.

The only real trouble were a group of people who came to be called “flaneurs”  - those who really don’t know where they want to go, and prefer to wander, intentionally bumping into people, or even meeting people they don’t know. They started in the park where there was open space and lanes were harder to control. They defied the Mayor’s directives by shutting off their spray modules, smelling things they weren’t supposed to and dropping into little grocery stores where the scent of spices was so thick that the navigation system was thrown off. Kaluystan’s Spice shop was a regular haunt. People were known to walk aimlessly from the upper west side, into Zabar’s or Fairway to smell cheese, and then trek all the way past Korea Town to smell kimchi, then past what used to be Balducci’s in the village, down to China Town, where the scents were irresistible, funky, rotting, fishy. Any place like this wrought havoc on the system and had people walking in circles. That’s exactly what the flaneurs wanted.

Interestingly, the movement grew so popular that there were pushers on the street hawking spice bags, which people would hold up to their noses so they could take time to wander. There were radical flaneurs who lit piles of myrrh or swung incense burners and chanted in the streets. This threw off all the pedestrians, who were suddenly impossible to track, ended up in little crowded barbershops by mistake, or found themselves discovering little restaurants they never knew existed. Within a few years, the city had on its hands a full blown revolution in smell. Work came to a virtual standstill since no one could remember how to get to work. And the city once again stunk to high heaven. But no one was smelling their own track, they were following other people. Many even tossed away the underarm deodorant the city had made mandatory.

Eventually, a giant cloud of body aroma hovered over the city and then slowly but surely, they let back the buses. Then the cabs. Then people started smoking in the streets again. The street vendors returned with their dirty water hot dogs and candied peanuts. The shawarma could be smelled a block away. So could the stale urine seeping up from the subway grates. The city in all its glorious stench had returned.
Posted by Ken Albala at 3:45 PM 4 comments:

I realized this morning that I have been writing this blog for 8 years. That went quickly! It started as a place to randomly rant, then morphed into a think pad for two cookbooks (The Lost Art of Real Cooking and The Lost Arts of Hearth and Home.) All the material that went in those was taken down of course. I'm not sure what it is now, but there are still some things about blogging that perplex me.

First I wonder how and why most of the traffic gets to me. Is it completely random? If you google beef bungs, my image comes up first. A dubious distinction, I know! I also just noticed it's listed in the Oxford Encyclopedia of Food and Drink in America. (OK Andy Smith is a friend). Then I spotted it being discussed recently in this article I was reading: http://www.historicalcookingproject.com/2014/04/regarding-state-of-scholarly-food.html

There's really no reason for me to write any more, apart from fun. I've never put ads on it or monetized it. Sometimes I direct traffic here via facebook, but I'm wondering why, if I could just post directly to face book? The part that baffles me though, is people almost never leave comments, which is fine. But there is actually a ton of traffic. About 200-300 hits every day. And then last Monday, for reasons I can't explain, 600 people stopped by, even though I was away and posted nothing. Most visitors come via google.

Maybe I should be doing something more with this?? If you have an opinion one way or another, please do let me know. I get no feedback here. Should it be more scholarly? Should I focus on historic cooking? It does seem a bit scattered now. I literally write whatever pops into my head, as the last post bears witness. Any and all opinions are welcome.
Posted by Ken Albala at 11:14 AM 40 comments: 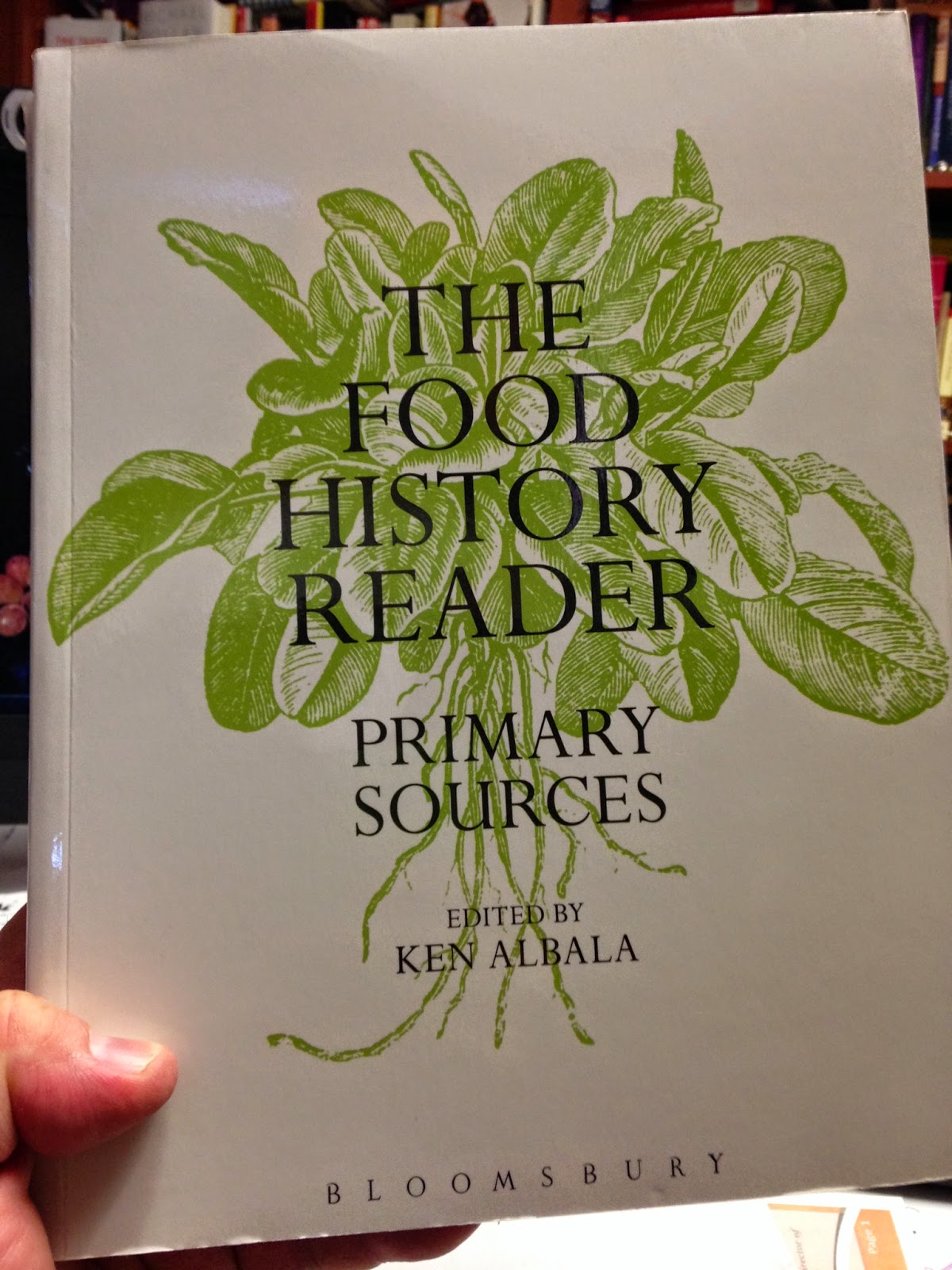 Here's #20. It was a really long slog, especially given all the copyright issues. Some great selections had to go, but in the end I really like it. Will be great to use in class!
Posted by Ken Albala at 1:04 PM 3 comments: