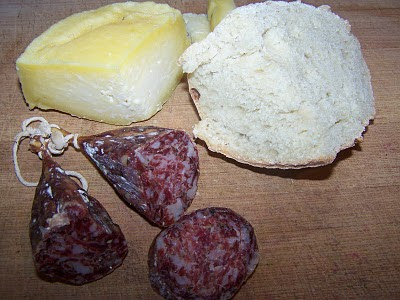 What a curious day. I lectured in the morning on William Morris, which I haven't done in a decade. About the pleasure of making things for other people. The exercise of labor outside the capitalist economy. We were covering Utopian Socialism the day before. And by sheer coincidence I woke up at 4:30 this morning to start baking. And also emptied the cave of salami that was definitely ready, and a cheese made a month ago. Sort of like provolone. And some pickled asparagus. All of it was perfect. And I brought all this to my food policy class. And this is what was left. Do you think one could possibly be happier? Only wish I had some homemade wine to bring too.
Posted by Ken Albala at 4:29 PM 5 comments:

A Feast Inspired by The Borgias

So if you read any cooking magazines, you will have seen by now a flashy add for Jeremy Irons as Pope Alexander VI in "The Borgias: The Original Crime Family." I have no doubt it will be a bodice-ripping, blood-splattered melodrama like The Tudors. But what caught my attention is a feast inspired by the series, with culinary luminaries like Marcus Samuelsson, Todd English, Nancy Silverton and Cat Cora.

In case you don't know the Borgias, Rodrigo was from Valencia and became pope Alexander VI in 1492, drew up the infamous Treatise of Tordesillas which divided the world between Spain and Portugal, among more infamous acts. So I guess that's why they were thinking New World ingredients. Chili sauce on shrimp, tomatoes in a cibreo, and a chocolate budino for dessert.

But of course the Borgias never ate any such things. Tomatoes and chilis don't show up in recipes until the late 17th century, and chocolate was drunk, not put into cakes until much later - and no European in the 15th century ever tasted chocolate anyway. OK, I know, they say "inspired by" but why? They could have used real dishes these people ate, taken directly from contemporary cookbooks. There are even Catalan recipes (that I a convinced come from Rupert of Nola) adapted in Martino of Como and published in Platina's De honesta voluptate. (Produced at the papal court for God's Sake!) In other words they had the real thing - and there are even modern editions. And they decided to fake it. What's the point? What do you learn about anything except the egos of these chefs. Drives me absolutely rabid! A real opportunity to taste culinary history and they make the whole thing up! (I now fling myself into the corner with my mouth foaming).
Posted by Ken Albala at 3:37 PM 11 comments:

I've never considered posting from abroad. Not bringing a computer made that impossible this time, but upon return, why not? I found myself with a free day in Paris on Saturday. Among my favorite things in this world is a mindless mapless ramble without any particular goal. Of course if you know the city, you inevitably drift toward familiar haunts. In NY, it might be Balducci's or Chinatown. In Rome, the Campo dei Fiori, or even better the market in Prati. Always a matter of food, of course.

So how delightful that my internal gastronomic compass should direct toward Les Halles. Or at least the big stinking open pit, that even after being gone many years, still has magnetic force. Not the belly anymore, perhaps the bung? Adjacent is the old Jewish neighborhood in Marais. Most of the kosher butchers were closed. But there was Schwartz's, packed utterly to the gills and spiling into the street, or I would have tucked in for some pastrami.

Did stumble on a little market though, too early for oysters alas, sea urchins as well, but there were my favorite pine-honey candies. Still regretting not smuggling home cheeses though. A few little museums, some brightly colored marshmallows - apricot, mint, rose. And the whole day was spent. A dinner with gorgeous snails, rilettes, ruddy Chevergny - not to mention VERY frightening andouillettes. Do you know what I'm talking about here? Pigs intestines stuffed into pigs intestines. Smells like pig shit, otherwise very tasty. It's just the feeling of having intestines in intestines, in your intestines, that's philosophically perplexing.
Posted by Ken Albala at 5:50 AM 3 comments: 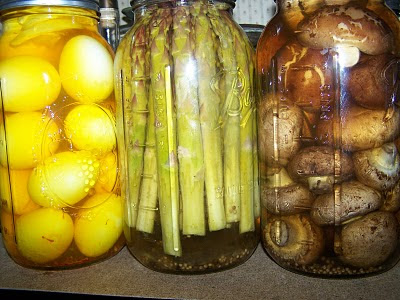 What a pleasant day for pickling. Someday I hope I'll be able to say I grew these and put up 100 pounds, but no. No chickens, no woodland for mushrooms, no verdant asparagus laden fens. But our local farmer's market did supply. 5 bucks for a big flat of brown eggs, 2.50 a bunch for fat local asparagus, and our own fungi finder provided these. Simple acid pickling. Not "canned" just hot brine and vinegar (50/50) with spices - saffron and lemons with the eggs, dill with the asparagus. Sealed and should be ready in a week or so. LOVE this stuff.
Posted by Ken Albala at 4:55 PM 4 comments: 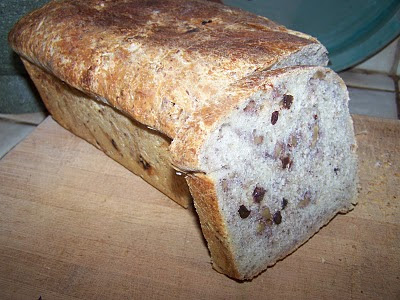 I think I threw everything in the house into the smoker yesterday - a cured brisket, sausages, a pork shoulder. So it was surprising at the end of the day that this bread was the most interesting thing that happened.
I'm not sure if this is how it's supposed to be done, but if you start with a regular levain dough, after 2 hours' rising, dump in walnuts, currants, sugar, butter. What could be bad about that? 12 hours rise in a bread pan. It makes a lovely breakfast, toasted. But what's that smokey smell? Ah, it's me.
Posted by Ken Albala at 5:59 AM 2 comments: Having breakfast at my desk in the morning means sitting adjacent to the storage shelves, and every now and then my nostrils are assailed by something pungent and odorific.
Today I sniffed with particular interest. OO doggy, OO dat? Ah, sardines. I forgot about them. A week ago, no two I think. At room temperature. In an escabetx. That means fried and doused in vinegar, olive oil, rosemary, pepper.
The surprise? It's remarkably mild. Dare I say even delicate? But it's not herring. Please, anyone knows where to find fresh herring, let me know. Pappa needs some seafoo.
Posted by Ken Albala at 5:54 AM 9 comments: