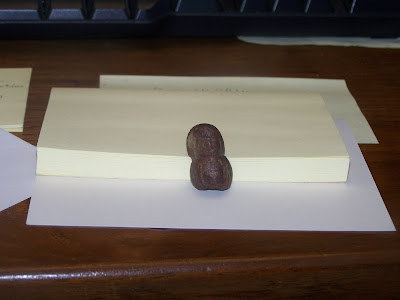 In the Summer of 1985, I was studying at Oxford, and by chance was wearing a dark grey polyester suit jacket I had bought earlier that year in a thrift shop for a buck. (The kind of dumpster-dive thrift shops that no longer exist.) I think I wore that jacket that entire year, and it collected various extraneous objects - a tuft of wool from a sheep, a little bell from a Scottish woman I adored, a star-shaped pin of Baby Lenin. All these are still in the pockets. Along with the remnants of an orange Jelly Baby, put in the left hand pocket one afternoon in Oxford. It was half eaten. A girl named Jane bit off the lower extremities, pronounced it revolting and put it in my pocket, where it has remained for the past 23 years. Recovering it from my closet was a kind of archaeological experiment - how long can such food last? Not that I would consider eating it, but if you look closely, you can see Jelly Baby is still smiling.

For the man who never wins anything, comes the news that I have just one second prize in a recipe contest! Here's the recipe and the judges' comments. If you'ld like to see the original context go to the Burnt Toast Website. An unlike most things I make up off the top of my head, this one I have actually eaten - for breakfast mind you.

Start with a heel of cibbata about 5 inches long. Slice in half horizontally, remove a little of the interior and toast. Layer on the bread a few slices of turkey, some mashed fagioli (i.e. beans, cooked in fiasco is ideal), a thick slice of tomato sprinkled with sea salt and ground chili pepper and drizzle of olive oil, a piece of roasted red bell pepper (charred over an open flame) and grate over this a good ounce or more of serious dark chocolate (70% or above is best). Close up the sandwich and place in a flat pan or comal (not a ridged grill) with a pat of butter and plate atop a heavy cast iron skillet or brick. The weight will squash the sandwich. Cook on both sides, melting the chocolate and crisping the bread. Serve hot.

The idea of the recipe, apart from deliciousness, is to remind the eater of the enormous debt of Italian food (especially that of Tuscany) to Mexico, made possible by such notorious figures as Amerigo Vespucci. This dish is named for his gorgeous relative Simonetta, the strawberry blond pictured in Botticelli paintings.

Joanne says she was "worried that my Italian-ness was making me biased in favour of [the panino recipe]." But now, she's going to make it for her Valentine's dinner. Michael relates how the turkey and chocolate panino "made me salivate like a cat!" He says he could actually see the sandwich and then swears that by the final sentence, could even taste it.
Posted by Ken Albala at 11:03 AM 5 comments:

The Joy of Miserable Failure

For reasons that elude me, my ability to made enchiladas totally evaporated this past weekend. It's as if a small lump of my brain secretly escaped from my head, with all the directions for making enchiladas. The circumstances were admittedly pinched. I made the tortillas in a fit of boredom, without really knowing what I would do with them. I pulled out the tortilla press and thought, "I've never seen this before in my life!" What happened to my old tortilla press? And what do I do with this thing? It took me a while until I remembered, AH, plastic! The dough must have been too dry too, because the edges were all cracked. Am I supposed to use lard? Like I said, it just escaped me. But I persevered as only the maniacally driven can do.

And then the lights went out. Totally. So put the tortillas in the fridge, hoping everything in there wouldn't spoil. And went out for Thai food.

Then the next day I had work to do in the morning, hurried and harried. And a superbowl party to go to that afternoon. And I think, ah, I'll just whip up some enchiladas out of these and voila. I have some black beans, tomatoes, cheese, some nice pasillas to roast into a sauce. I have absolutely no idea what next transpired, because I whipped myself into a frenzy, chucked all this stuff together, cursed the tortillas for falling apart, threw in handfuls of whatever I could find. Haven't I done this before? And it wasn't it luscious?

Well, what ever I did, this malformed enchilada casserole sucked.

So what did I learn from this lesson? 1. Think first, cook later. 2. Find a recipe if you're not sure how to do it, as loathe as you might be to actually following directions in a cookbook. 3. Never make something complicated in a hurry. 4. And here's the most important thing:EVERYTHING NEED NOT BE MADE FROM SCRATCH! No one bloddy cares if you made the tortillas yourself, burnt your fingers chopping chilies, and even rubbed your eyes with spicy fingers. I could have bought some tortillas, dumped in salsa and cheese and a few beans and it would have been lovely, even edible.

Instead I got baked on corn stoge to scrape out of the casserole yesterday. It's still soaking in the damned sink. But I will have my revenge. I will download that enchilada file in my brain again, cookwith patience and show the Gods of Discord that once I wielded the tortilla press with unquestioned acumen. Bring it on....
Posted by Ken Albala at 3:58 PM 4 comments: