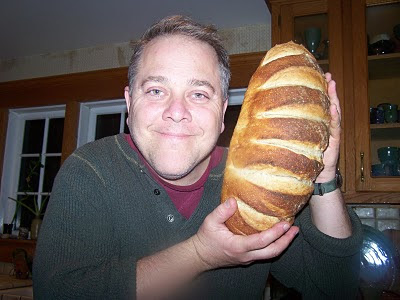 I was reading the current Art of Eating this morning. A magazine I have always loved deeply. This winter issue was especially heartening - to see friends in there, Nancy Jenkins with mushrooms and Hank Shaw with ducks. But what really caught my attention was the bread article by James MacGuire. I was literally shaking with excitement, wondering why this has been under my "to read" pile so long.
And as I read of Polaine and flour grades and finally the recipe with exacting measurements, my eyes began to glaze over. Wait, I love baking bread, everything about it! I am on the verge of building an oven, making the damned bricks myself, by hand. Where and why did I lose interest?
It then occured to me that I am constitutionally unable to follow a recipe. Or even precise directions. Making bread, I do not want to measure anything. I want to feel the dough, let it go where it wants, knowing full well it will always be different depending on the weather and the whim of the Gods.
SO this morning at about 8 I just whipped out some of my darling starter, more than I would usually use, being inspired by the article honestly, though I have a gloppy starter not a solid levain. I am not baking every day. Nor can I imagine anyone would or could unless you were running a bakery - which is exactly the problem with most of the bread books. They measure everything meticulously for consistency. If my bread flops, so what?
This one way fun. Maybe two cups of starter I'd fed the night before so it was bubbly and violent. Then a pour of whole wheat, a pour of rye, a glug of honey. Some bread flour. Nothing measured. No recipes. It was stiffer than I expected. Let it rise two hours then knocked it down and shaped into a football. Three more hours sitting on a piece of parchment under a big bowl while I pulled out a tree from the side yard. A BIG one. Had to cut it all up, and I am aching.
Baked it at 550, lots of steam with Buster carefully following every move. He is an apprentice. And take a look. Who needs recipes? Seriously.
Posted by Ken Albala at 6:22 PM 7 comments: 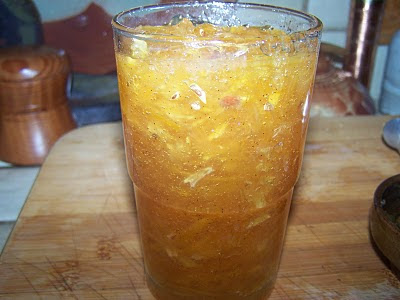 I have never been an avid maker of jam. Or I should say my habit of winging it has resulted in a lot of runny flops. Or worse, so many jars that I couldn't give them away - the year I made concord grape jelly from a huge stockpot full of fruit. And then there's the whole canning jar business, pain in the neck.

But this time it was as if the fruit and I were meant for each other. I have to admit I have never set eyes on a Bergamot orange. I was in San Francisco and went to visit Rachel and her new husband and we all made a brief foray to Bi-Rite and there they were, like little round unassuming lemons. But the aroma, indeed Earl Grey. Heady.

So armed with nothing but a knife, a peeler and a pot, I peeled two specimens and julienned the strips finely. Then removed all the white pith and chopped the flesh, tiny pits and all. (The source of pectin, I think.) Then added about 4 or 5 tablespoons of sugar. This is to taste, and I like it bitter. Some water. Cooked it for about half an hour or a bit longer on high heat. When it was thick, poured it into a glass. Simple enough. On toasted ciabbata, a bit of butter from Isigny, a sprinkle of Spanish sea salt, and a good dollop of this marmalade, utterly magnificent.
Posted by Ken Albala at 7:25 AM 12 comments: 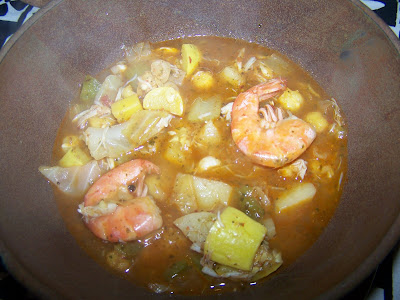 Moving rapidly from Uganda to Ecuador, as you can imagine, boggles the mind. At least they're both on the equator. In any case, I ended up writing the encyclopedia article for an author who flaked on me. A lot of fun, but of course it's postponed editing the monster (Food Cultures of the World). But look at what happens. This is a chupe de pescado, and I don't know honestly if the etymology is related to cioppino, but they are similar.

This one starts with a mixture of onions, celery, green bell pepper. So far sounds like a soffrito. Annato for color. Some tomatoes, water. Bay leaves and oregano. Hominy stood in for proper Ecuadorean choclo, then carrots, parsnip (yuca would have been better) a cut up potato, yellow squash, cabbage, and I guess any fish will do. I had crab meat and some shrimp. A raw egg could go in, and even crumbled white cheese. But I went for simplicity and a squeeze of lime. Touch of chili. I am about to eat the leftovers now for dinner. Can not wait!
Posted by Ken Albala at 4:54 PM 11 comments: 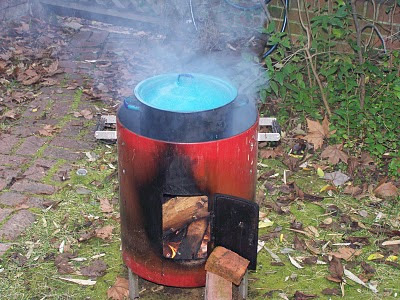 The fates decreed, not I, that the article on Uganda for my monster Encylopedia would be written by me. Not the first time I have written something about which I know nothing. Luckily I had a friend of a friend, Roger Serunyigo, tell me all he could from the inside, as someone in the Baganda culture, and whose mom is apparently a fantastic cook.

So today I decided to make matooke. Plantains are not as good as little green bananas from S.E. Asia, which came out nice. Wrapped in banana leaves and steamed. Then mashed. And I was told cooked over a real fire makes everything taste better. I am now cerain of that. So, the main dish is Luwombo. For the book I wrote the recipe with chicken, but trust me, beef was unfathomably delicious. You need a really tough fatty cut. I used back ribs, cut off the bone. Use an expensive cut and this will probably be awful.

You first brown some onions, throw in some grated ginger, some salt and pepper, a few chopped tomatoes, and then a lot of real finely pounded peanuts. It's not peanut butter, just ground peanuts. Then quickly grill the beef, which has been cut into small pieces, over a fire. Real fire. After barely browned, throw it into the sauce. Then wrap this whole mixture in banana leaves and tie on top with several strands of banana leaves. Any S.E. Asian shop sells them frozen.

Then put them in a big pot, over an upturned plate, with some water on the bottom, with the matooke too, cover and put on a charcoal fire, and let it steam for a couple of hours. Must be eaten with fingers. Well, actually not, but I prefer my fingers! 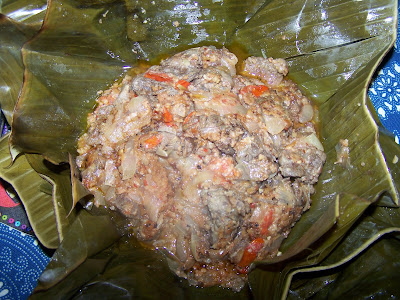 Can I say, I have never tasted anything like this in my life. The leaves so intensely flavor everything, no other seasoning is necessary. The beef is soft and pliable, but still chewy, not a stew, but a steamed meat with peanut sauce dish. I could have eaten it all but didn't. No one else in my house would touch it. Anyone like Ugandan food, come over any time.
Any if anyone can explain the sexual politics of luwombo to me, please do! I think if a woman cooks it for a man, it means she wants him. And a man should never marry a woman who can't cook it. Where does that put me??
Posted by Ken Albala at 7:19 PM 11 comments: