Another Lesson in Culinary History. You may find an interesting recipe from the past, but that doesn't mean it's good. Case in point: this aspic from 1957. Disgusting. 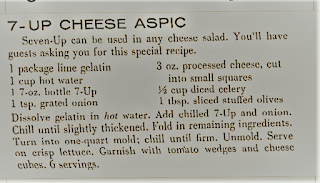 Just thinking about it made me want to gag. But I made it. With Velveeta, which I've never used before. Ate a little and then gagged. (The onion sounds horrid, but you can't really taste it.) 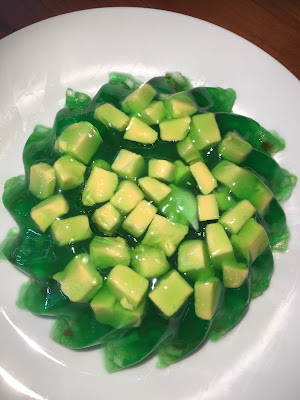 But it occured to me that the idea was actually sound. Imagine a lime flavored cocktail nibbling on cheese and good olives. Now, if you weren't using lime flavored jello. And of course I added vodka. And real lime juice, just a touch of sugar to balance the acid. And then good cheese, a St. Andre Triple Cream. And now I totally get it. Garnished as directed. Delicious. And indeed, a salad. My guess is that the 7-Up people and Jell-O people took a perfectly fine recipe and tried to make it with their propriety ingredients and totally messed it up. There must be an original somewhere. Lesson learned: don't be afraid to make a terrible sounding recipe good - at least after you've followed the directions once. 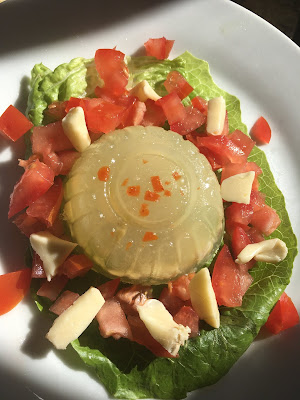 Oh, directions: Squeeze the juice of a lime and a half or 1/4 cup. Add 1 1/2 packets unflavored gelatin. Heat 3/4 cup of vodka to boiling. Add that to gelatin. Pour into small molds (I used four very small ones) and drop in the celery, olives, cheese cubes. Then garnish with tomato and more cheese on a lettuce leaf. You could actually even add some salad dressing if you liked. 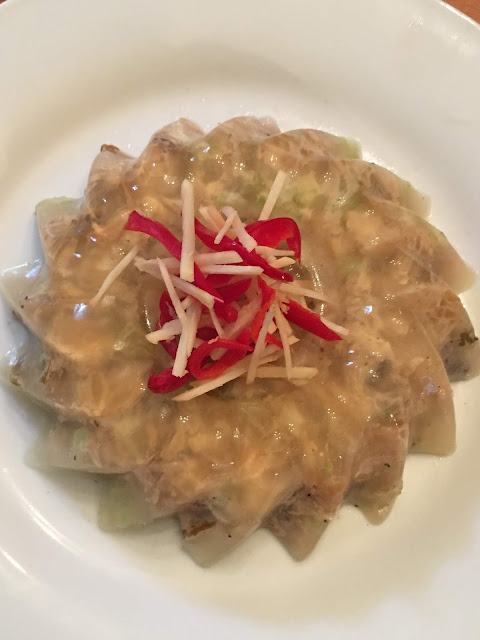 I was channeling the 60s. And fully expected it to be gross. But remarkably good! Stir fried chicken, ginger, sesame, soy, cashews, raisins, celery, mayo. Set is a riesling gelatin. Yah! #jelloshot
Posted by Ken Albala at 8:46 PM 2 comments: