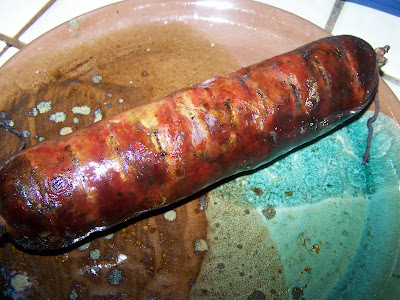 There is something about this holiday season that has made me go pig crazy. Not that I don't ordinarily revel in every imaginable piggy part, but I seem to be eating pig in some form at every meal lately. There was the beautiful shoulder ham I smoked for Christmas, which was sliced, fried and deglazed with rootbeer as leftovers. Not to mention the salamis for breakfast. Or the can of boudin noir I brought back from Paris. Oh, or the great pork chop I had for dinner last night.
Well, the other day Vanessa Barrington, author of DIY Delicious (a cookbook that is in most respects very much like my own; a truly kindred spirit), came over to play in the kitchen. We tried some smoked and pickled vegetables, which I'm still letting mature, but it was mostly a pig day. She brought this pickled Portuguese pork for me to taste, which was unbelievable. And we just wacked up a ton of pig for some pates, guianciale, bacon. And FINALLY, some liverwurst, which you see here. The liver was huge and very frightening, to tell the truth. But the technique could not have been simpler. It is just pork butt, lightly poached liver, onions and spices, pounded to a paste, put in a beef middle, and smoked for about two hours over oak. I'm letting it mellow for a couple of days in the fridge. Maybe it will make it all the way to New Years, that is if I do! Have an Oinky New Year!
Posted by Ken Albala at 3:37 AM 4 comments: 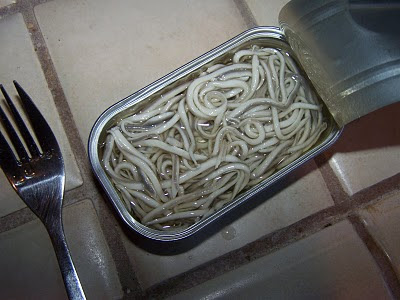 After a recent discussion about the pleasures and perils of eels, I decided to share some of my friends. Ceci ne'st pas un eel. Not even eels, nor even elvers. Isn't that the cutest name? No, they're basically noodles in oil, vaguely garlic and fish flavored, sold to Spanish people as baby eel surimi. Replete with a little silvery stripe down one side. Who are they kidding? Don't buy it. 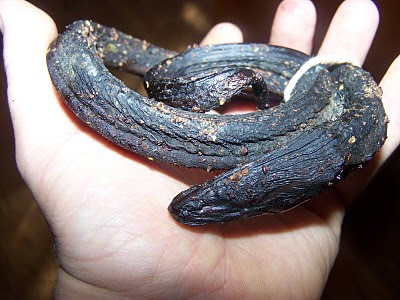 And alas, we are told not to buy the endangered Anguilla anguilla, close relative of Magilla gorilla, which some people, like our friend Janet, live in mortal fear of. Along with dangling prepositions. Is it anything dangling perhaps, asks Dr. Freud? Sometimes a pipe is just an... eel.
Well, this beauty is my friend Harold. Part pet since I've had him so long and say hi every morning. Yes, there was a Maude. I ate her. Harold, is now old dried up, smoked too much. So I haven't the heart to let him go. But I do take him for walks every now and then. See the leash? In case he wants to snap at friends.
Posted by Ken Albala at 1:22 PM 37 comments: 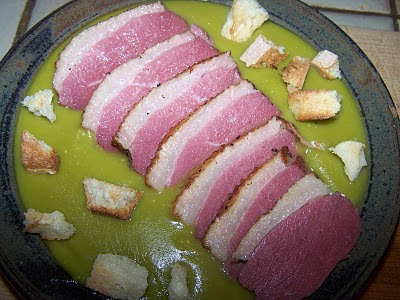 If you perchance peruse historic goose recipes, going much further back than Dickens’ roast goose served on the Cratchit’s Christmas table, you will find a panoply of intriguing techniques. There is goose baked whole in a pastry crust in 16th century Italy, goose stuffed with oats and boiled, geese semi-roasted, slashed and finished on the grill in what was known as a carbonado in Restoration England, goose ragouts and others served in a staggering variety of sauces. But one in particular caught my attention. It hails from Le Cuisiner of Pierre de Lune, published in 1656, and involves salted cured goose, served in a “pottage” of puréed peas. Here is the recipe, translated from the original:

If the goose is salted, do not lard it; if it is not, then lard it with bacon; then cook it in a pan with lard, and then cook through with bouillon, and a bundle (of herbs). Cook your peas separately and pass through a seive with the goose bouillon, parsley, a bit of pepper, and a morsel of green citron. Garnish with fried bread and little bits of crumbled bacon.

To help recreate this dish, here is a full description of the technique: Carefully remove each half of the breast from the goose with a sharp boning knife. Keep the skin attached. Remove the legs and thighs intact for another use, such as confit. Use the bones and giblets for a light stock, which you can freeze for use later in the recipe. (Reserve the liver for yourself, seared and served on crackers.)

Mix 2 tablespoons of fine sea salt with 1.5 tablespoons of unrefined sugar, 1/2 teaspoon of instacure #1 (or “pink salt” which can be bought on line or at specialty grocers, or celery powder cure which works fine), 1 tablespoon ground pepper and a tablespoon of crushed juniper berries. Liberally coat the breasts, put into a large gallon-size ziplock bag and store in the refrigerator for a week to ten days. Turn the bag over every day.

Remove the breasts from the fridge, rinse off and pat dry. Brown them gently in a pan with a 2 tablespoons of melted lard (or goose fat). Toss in a bouquet garnis tied with string. Pour over goose stock to cover half way and cook breasts through very gently, with the pan covered, about 15-20 minutes. The final texture and taste will be remarkably like cooked ham.

Meanwhile boil a pound of green or yellow split peas in the bouillon with some parsley, pepper and candied green citron. Pass through a seive or purée in a blender or food processor. To serve, put the peas, which should be fairly thick, in a large deep platter and lay the goose breasts, thinly sliced, on top. Scatter croutons and bits of crumbled bacon on top for garnish. Serves 4-6 people. 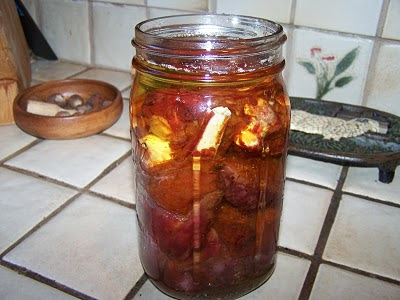 One Christmas break about 30 years ago my best friend Andrew and I decided we should eat a goose. We were in high school, and typically did odd things like this - throwing formal tea parties, making wonder wine. We had absolutely no idea what we were doing - just roasted it, drained off all the pan drippings, fat and all, and made a raspberry tinged sauce. It was good, surprisingly enough.
In the intervening years, I've come to realize that goose is one of the most perfect foods on earth, but there's so much more to do with it than roast and serve. So I've been curing goose breast, smoking odds and ends, rendering fat, chopping liver, making stock - everything you can imagine.
Recently the nice people at D'Artgnan sent me a goose (and the recipe, 17th century salted goose breast on a puree of peas from Pierre de Lune, should appear on their site imminently). But I also had other bits. This is the legs and thighs, cured for 10 days then simmered slowly in the fat for about 5 hours. Stuffed into a jar and put on the shelf. It has since gone opaque. Should definitely wait for Christmas. But AH, the anticipation!!
Posted by Ken Albala at 10:21 AM 12 comments: