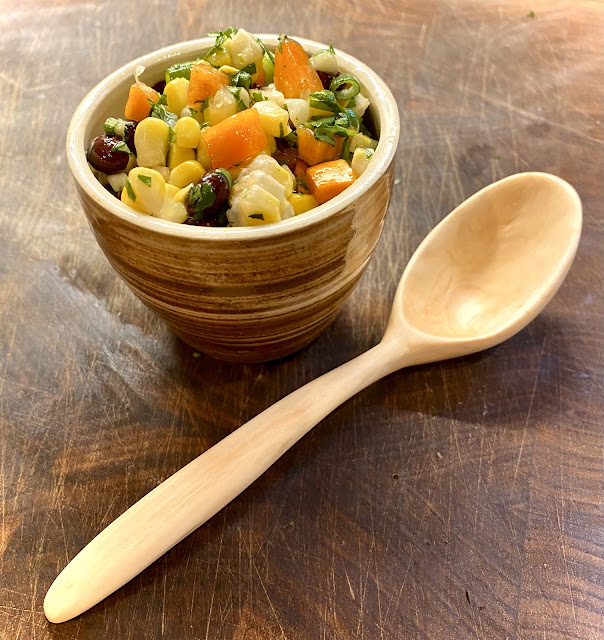 This week I started writing a new book, and I thought I'd share a brief essay from it. Here goes:

Beauty and the Graceful Line

It sounds a little silly nowadays to be talking about Beauty with a capital B in universal terms. We are so used to setting everything in historical context, being careful to understand the culture that produced an object without our own blinkered prejudices. We do this for good reason: it’s difficult to escape the way our own culture shapes our judgement, since we are so embedded in our own time and place and so swayed by the forces of fashion. We are hesitant to judge at all after so many centuries of revering great masters as canons of taste. Swinging in the complete opposite direction, the Romantics insisted that only the direct imitation of nature, even if gruesome, can serve as an objective standard, that which evokes emotion because it strikes us at the core without the intervention of intellectual rationale, or taste – which is just a byword for status. This was the complaint the energetic Baroque had with the cool intellectualism of 16th century Mannerism, and how 19th century Romantics rejected the Enlightenment, by turning to nature.

Nature does indeed offer lessons for craft, if not precisely in the way a painter approaches a landscape or a human body. We find objects beautiful precisely because they are well fitted to carry out specific functions. In nature, a flower is beautiful because it offers color, aroma, inviting form to the bee, who finds it beautiful and spreads pollen for the plant. WE find it beautiful for the same reason, though of course with added cultural baggage.

So too is there beauty in objects. It is not so simple that form should follow function as architect Louis Sullivan insisted, but that certain material dictate certain shapes, or they simply collapse or refuse to work. A teapot may be gorgeous but if it doesn’t pour, it’s not a teapot – I’ve made a few of those. It may be art, but that’s an entirely different topic. Here I am concerned with the relationship between objective standards of beauty and the utility of everyday objects. If we simply say everything is beautiful, then there are no standards and we are subjected to hideousness and filth.

What then constitutes Beauty? Let’s begin with the line. They come curved, straight, bent, twisted and curled. Each exists in nature and for quite specific reasons. In my own backyard there are grape vines that stretch out and tightly grab anything with little curled tendrils that support the plant’s desire to stretch outward. The leaves thus achieve maximum exposure to the sun, and the result is sensuous curvaceous vines. The bamboo has an entirely different strategy, it busts straight upward as fast as it can in a week or two growing 50 or 60 feet, and then pops out leaves that are so high up, nothing can shade them. The higher it goes, the thicker the stem needs to be and some can be a foot in diameter. Each is beautiful in its own very unique way.

Leonardo da Vinci appreciated this. He drew the swirls of the horsehair equisetum plant and wondered why the whorls were similar to the eddies in gushing rivers, and the flow of blood coursing through our bodies. I think he was considering precisely what physical properties can be considered universally Beautiful. Skeptics of course will point out that appreciating such forms is a cultural value, even nature itself is culturally constructed. What one people find beautiful is strange or meaningless to another. The Enlightenment philosophe Voltaire quipped about this in his Philosophical Dictionary when he asked what is the To Kalon, or ideal form of beauty. To a frog it’s a green complexion and bulging eyes. He was calling for a relativistic approach, to each his own. But Voltaire entirely misses the point, that frogs are eminently beautiful – their slippery skin, their bulging legs perfectly designed for jumping, their circumspective eyes.

How does this relate to human made objects? Let’s turn to pottery. If you lift the walls of a clay vessel, either wheel thrown or hand built, straight upward, eventually the form will twist and buckle and then probably collapse. To prevent this you have to make the walls so thick that the vessel is blunt and too heavy to use. But if you give the pot a shoulder or hip (ceramic forms are often anthropomorphized) so it bulges toward the top or bottom, the pot gains structural integrity. But it also becomes beautiful, the line becomes sensuous, much like the bend of a spoon, and it becomes stronger, lighter and more functional. An acute angle in a pot wall or spoon compromises its use. A bent spoon will spill soup in your lap. A pot that flares out at the top too sharply will flop down through the force of gravity. The “well wrought urn” is not curved because that’s the way the Greeks did it, but the Greeks did it that way because they had to. So did the Chinese masters of the Song Dynasty and potters of Seagrove, South Carolina. The vase turns out to be a great example of Beauty.

I hear your objections. Aren’t there awkward angles in pots, and forms intended to disturb or shock the viewer/user? Obviously in museum art, but I’m not so sure about utilitarian wares. Think of food, it must be palatable, meaning it can’t contain sherds of glass or metal, and it can’t be laced with arsenic, or it’s no longer food. But don’t some cultures adore foods that others abhor? Yes, but anyone can learn to overcome those culturally learned preferences, just like they can learn to like coffee or whiskey, or unlearn our instinctive predilection for sweetness. I mean, a baby would happily eat a worm if offered by a parent. Does that mean that there are some foods that are universally Beautiful for all cultures and all times in history. Of course there are, just as there are dreadful foods people learn to love – I’ll take a marshmallow peep or gummy candy any day.

I argue that certain flavors, combinations of ingredients, cooking and preserving methods are universally tasty. Maybe some don’t like too much heat, or are genetically averse to cilantro, but think of that innate preference for sugar. Or think of how smokey flavors are hardwired into our limbic brain after millennia of  cooking over fire. Or even take a food spread around the world – like pasta, which is universally Beautiful. If anyone tells you they don’t like pasta, they are either on a low carb diet or lying. I would say the same for an elegantly sloping bowl, just holding it in your hands gives instinctive pleasure, as does the graceful arc of a well carved spoon. These transcend all time, space and cultural prejudice.

I realize I haven't posted in months! This is what I've been up to. Carving spoons. It took me a long time to get decent at it. Today I counted, 80 spoons so far since the spring. I intend to get a book out of this, provisionally called FOOD CLAY WOOD. I just started writing. Stay tuned. In the meantime the Gelatin book is in the warehouse and ready to be shipped! And the cookbook now entitled OPULENT NOSH is about to be contracted. All ready to go. 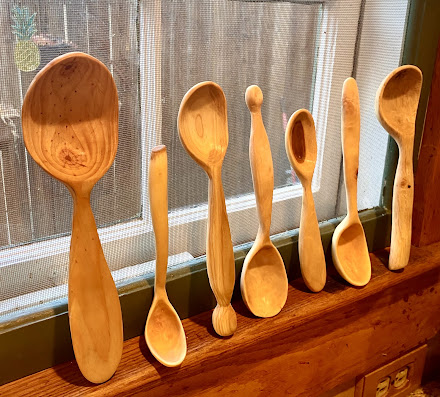 Posted by Ken Albala at 4:20 PM No comments:

The Great Gelatin Revival - WE HAVE A COVER! 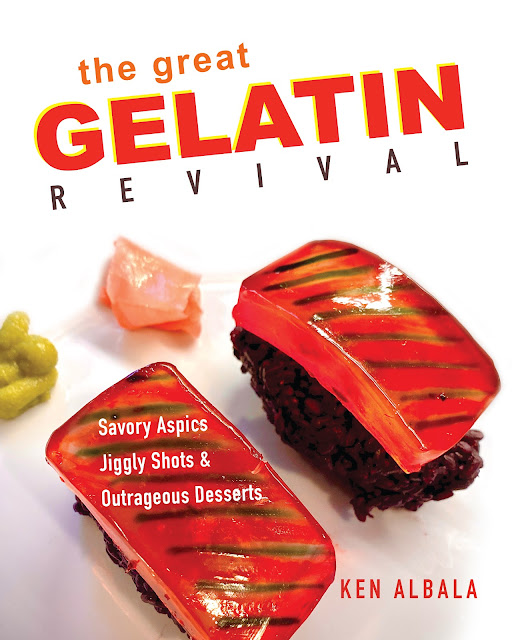 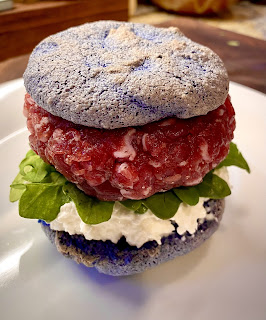 My first shot at macaron and a bit lumpy, no smooth top and no "legs" but they taste very good, with raspberry jam everyone ate them happily. But mine I filled with this chopped filet mignon. It has very little flavor when cooked as a steak, only softness. But that makes it ideal for eating raw.

The sweet almond flavor of the macaron with meat makes me think of medieval flavor combinations, and if there had been a little spice to it, definitely so. As it was, the compliment of the bitter green and pungent horseradish went perfectly. 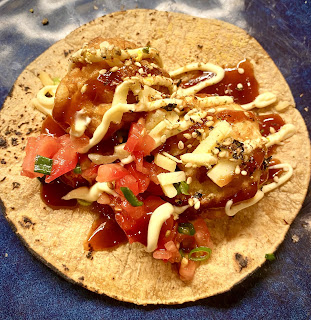 I can't imagine I'm the first person to stumble on this wordplay, but the flavor combo is truly delightful. Takoyaki with octopus of course, in a taco with pico de gallo, cheese, mayo and sauce on top. 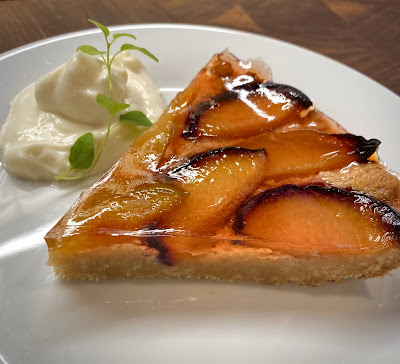 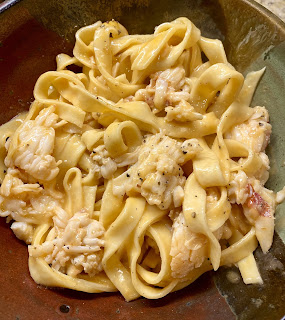 There's a first for everything in life: Leftover Lobster. It called to me from the fridge all night. So I gave in, made some fresh egg noodles, tossed with butter, parm and a little lobster stock. OH my goodness!
Posted by Ken Albala at 5:55 AM 17 comments: