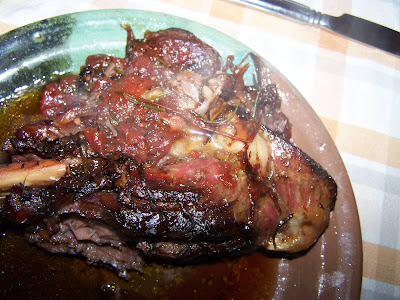 The torrential rains have hit early this year. It makes me want to work, which is good since the copyedited Lost Art of Real Cooking has arrived for corrections. As you may have noticed I have begun to remove posts here, those which will appear in the book. Alas. Without forethought I somehow find myself exactly where I was a year ago when starting the book with Rosanna, putting up pickles and olives, making a new sourdough starter, craving long braised flesh.
Thus I was led to this simple dish: lamb shanks lightly browned, placed in a casserole with fresh rosemary and bay leaves, tomatoes and a whole bottle of Inkblot Cabernet Franc. What inspired such profligacy I wont venture to guess. Gently baked about 5 hours, without the slightest stir or nudge lest it fly asunder and be smashed to atoms. It took the gentlest cradling merely to move it from casserole to plate. Thereafter it need only be spooned into the mouth. UNCTION.