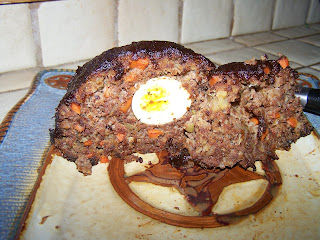 There are few foods that have such vivid associations as meatloaf. It might even be the quintessentially uncool homey working class dish. It is the Ernest Borgnine of American cuisine. Good honest and plain. Which is of course why it has always been so ripe for a makeover. Or at least was. Meatloaf had its shining moment in restaurants, a few years ago, as a retro-comfort food. Made with grass fed organic beef, and local vegetables in season, naturally. Maybe even served with toast points to remind people of what became of its French cousins who did so well. But the makeover can go too far, if it tries too hard to be hip, fakes the funk, or somehow loses sight of its homey core, the meatloaf seems tawdry and tarted up.

Well, I think this one rides that fine line between being true to itself and yet still exuding elegance. It is still a meatloaf my mom would eat. Bison replaced beef, for no other reason than I saw it in the store for 7 bucks a pound. So this was hardly expensive in the end. I had to put the hard boiled egg in the middle. Inside went diced carrots, you can see, celery, shallots. But the real kicker and the key to light texture, came from a cup of sourdough bread crumbs, fried in the last lump of that lardo battuto I wrote about a few posts back. Plus a good squirt of tomato paste. And then, just so it's not too pretentious, some barbecue sauce as a glaze, and it was cooked in the toaster oven. 350 for about an hour. I say meat loaf needs another revival.

Do you eat your mother? I mean that snot-like raft floating on the top of your komucha jar. I got the idea from a little snippet in Sandor Katz's new book, and I thought why not? I suppose it really should be raw if you want to ingest good bacteria, but I thought a little salt pepper and a quick sautee in good olive oil would be interesting. It was rather sour, but the oddest thing  - the texture is really firm and chewy with a kind of muscular structure. Very much like a scallop, which it sort of resembles. OK a vegetarian scallop. I think if you soaked it to remove the sourness it would really work. Serve with a little kelp. I might be onto something here. I also cooked a big floppy red wine mother and used it as a wrap around chickpeas and lettuce. Another interesting idea, no?
Posted by Ken Albala at 12:24 PM 10 comments:

It is with great sadness that I said goodbye to my bees yesterday. Apparently you can't keep them in a wall. A man came, opened a square in the wall and took out three big 50-lb buckets of hive and honey. Although I had nothing to do with this operation directly, it was nonetheless terrifying, exhilarating, absolutely astounding. At one point he invited me into the room literally filled with swarming bees for a chunk of comb. The first chunk was golden and tasted a little like orange. I don't think I've ever tasted anything like it in my life. This is the second chunk, apparently older, and probably from different flowers. That's all they could spare, as they need the rest to start up in a new spot, a few miles away. Many of "the girls' were left behind to clean up the rest of the honey, which is now oozing out of the walls. Rather surreal if you ask me. So is the plastic covering the hole and the furious buzzing behind it. The weirdest thing, is the bees through this whole operation just did what they were told. Remarkable. 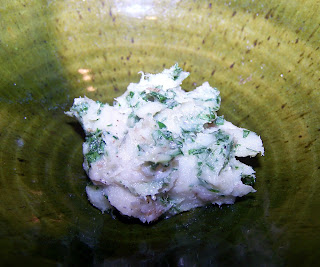 Who knew this would be so simple and delightful! It is called lardo battuto, which means literally beaten lard. Not the sort you find in a block in the supermarket, and in fact never heated at all, but salted and cured lard-o pounded in a mortar with garlic and parsley. I just happened to find a casing filled with cured fat in the back of the cave. I must have made it this past winter. I became familiar with this kind of lardo (in print) through my old friend Bartolomeo Scappi, personal chef to Pope Pius V in the 16th century. He uses it in stuffings especially, and anywhere some extra fat and flavor can be used. Apparently in Italy it gets tossed into soup and stews. OH YES. I tried it on toast this morning, and let me tell you: imagine compound butter, but cured pig instead. Aromatic, unctuous, dizzying. Thanks to Miss Butter who prompted this line of inquiry. It's a thing I should have done years ago. Now let's just think where this might go. Maybe a dollop on a pork chop? For some odd reason I want to stuff a fish with it. Scappi must have done it. Bread crumbs, cheese and lardo battuto. I couldn't have come up with anything that magnificent.
Posted by Ken Albala at 5:25 PM 8 comments: 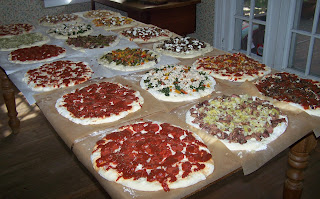 Somehow I think this speaks for itself. If you're going to make pizza, you might as well do it big time. There's classic pepperoni, the rabe and tuna, a pickled pork and sauerkraut up front, which turned out fabulous, and others included coppa which I found at the back of the cave, asparagus and a slew of other vegs. Arranging them all first this way made it easier to load and unload in the oven and take down the block to a party. There's still more, anyone free tonight?
Posted by Ken Albala at 10:03 AM 3 comments: