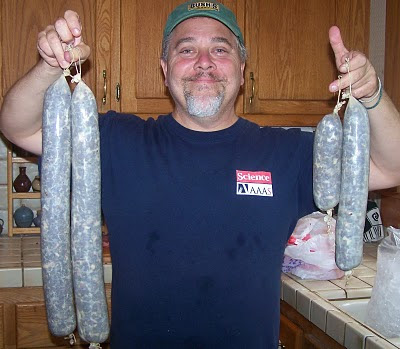 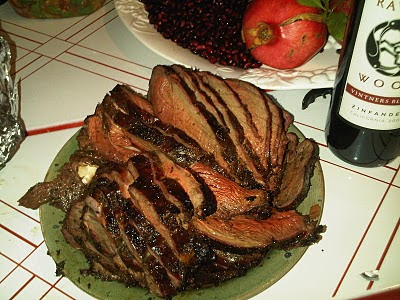 Kristine showed up yesterday with a cooler full of deer. I cannot even begin to tell you how much fun it was taking him apart. Here are some salami made from the front leg. All chopped by hand. The hind quarter became jerky from the round, a stunningly gorgeous and succulent roast from the eye of the round, some stew with pomegranate syrup, bones for stock. Even rendered down the fat, though I'm not sure anyone has the guts to taste it.

I can't wait until these are cured!
Ah, and here's the roast. YUM.

A Drop of Blood? 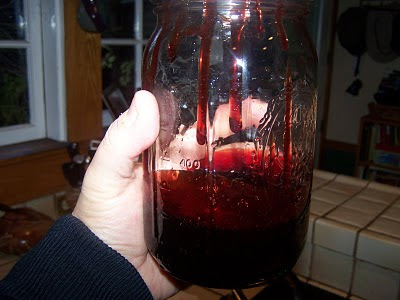 I hate to say, but no, it's not really blood. It's pomegranate molasses. Fra Luigi popped over the other night with a big bag of pomegranates from his tree and it got me thinking. Time To Make a SERIOUS mess.
So I broke them open by hand, squeezed big hunks into a stockpot. And yes, I got splashes of what looked like blood everywhere. Then just cooked it down with a few tablespoons of unrefined sugar and a vanilla pod. Very low simmer for about 3 hours.
And in the morning, this lovely, tart, nutty sweet, blood-like super-thick syrup was in the pot. I need not tell you how difficult this was to get into the jar! Nor that about a dozen or more pomegranates cooked down to this. But it is essential in Middle Eastern stews, and let me tell you, a little in tomato sauce is heavenly. Best of all, it never goes bad, completely shelf-stable forever. (Incidentally this can be done with grapes, for sapa.)
And just in case you don't have a costume for Halloween, go as your favorite saint, dripping blood from some missing body part. This would be great for Lucy. Though I'm thinking now of Oedipus. Anyone have a crown I can borrow?
Posted by Ken Albala at 2:40 PM 8 comments:

What Caliban Really Had for Dinner

The Sunday Times in Britain ran this neat review of Joan Fitzpatrick's Renaissance Food book, which covers my chapter and first experiments in historic cooking. It's funny how so many years can pass. These were only a prelude to The Lost Art.


And Check out www.good.is/post/why-fast-food-is-not-saving-you-time-nor-doing-you-other-favors/ Very nice review of the cookbook. 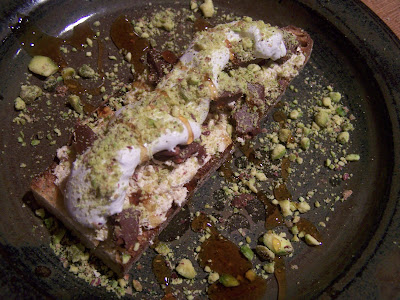 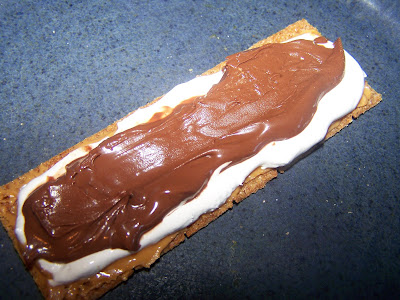 In honor of National Fluffernutter Day, and after reading several posts relevant to the topic, I resolved that I could no longer resist. Abandoned the pile of midterms being graded and rushed home to make this paean to pure kitsch.

NOT a fluffernutter, as you know I cannot abide rules. So this is a thin Finn crisp rye cracker with caraway. A layer of Skippy, creamy of course. A layer of Fluff. A layer of nutella. Absolute gorgeosity of deliciousness. Another cracker on top was an improvement. But next time I think some bacon. Seriously. But what to call it? Fluffonutellina con speck. Actually a thin slice of lardo would be great too. Got TO RUN. AND DO IT NOW!!!


So what you see first now is the reposte. A slice of homemade sourdough bread toasted. A layer of the best Lebanese Helwa. Chunks of Mo's Bacon Bar made by one of the most exquisite creatures on earth, Katrina M. Then REAL fluff. Crushed pistachios and a drizzle of local wildflower honey. (Perfect dessert after a halibut vindaloo.) 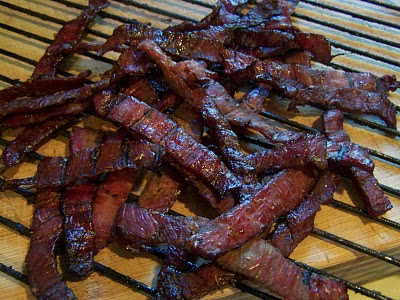 Saturday I spent the whole damned day in front of the smoker. Which would have been nothing terribly out of the ordinary, but I had a strange feeling that I was channeling a past life. Seriously. Not a New Age Mystical intuition, but an odd ability to live in the bodies and minds of people who lived many years ago. I was a Baptist preacher, I'm guessing in the 17th century. Trust me, I can rant. Hence the name of this blog. But sometimes I wonder how a Brooklyn born Jewish boy came to be sitting in front of a smoking kettle, sipping his own moonshine, chewing on a plug of baccy. Listening to bluegrass. 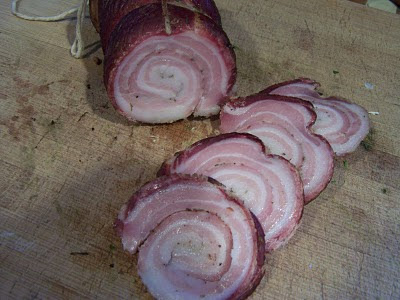 Smoking everything I could get my hands on. So I am actually myself smoked. Unpictured are the pork shoulder which was simply roasted in wet smoke after all this was done. 6 hours maybe. Ate last night at Lisa's. OH, and a little eel. He's hard as a rock now and hanging in the wine fridge. No idea what to do with him. But see the beef jerky. Top sirloin. Round does not work as well. Then a pancetta. Cured and smoked. It's really just a rolled pork belly though. Went into a broccoli rabe sauteed with garlic and chili peppers. Swear I nearly fainted. 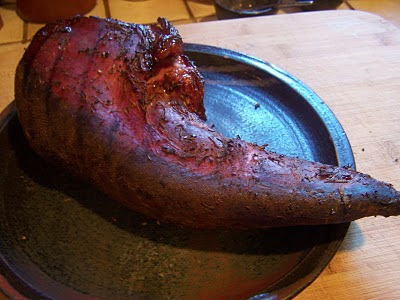 And best of all a little tongue. It's got to be a calf, much smaller than any I've seen before. Bought at the Asian grocery for a few bucks. Fresh. Cured for a week, then smoked over oak. Next steamed for several hours and peeled and sliced thin. I'm guessing.

You are coming over aren't you?

The sink is now unclogged after I made a rash decision to chuck some wayward brussels sprouts into the garbage disposal. We shall not do anything of the kind again. But now we are ready to go.

There are pickles in the cabinet going, fresh salame in the wine fridge. I am gearing up for a party of some kind folks. Let me know you'll be around.
Posted by Ken Albala at 9:52 PM 9 comments: