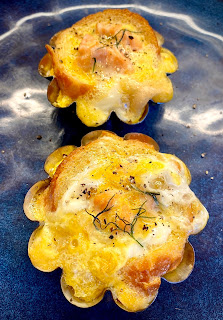 How to do Recipe Testing

First get on your sturdy hiking shoes and a good hat and a little blue backpack from Disney Word with Oswald the Lucky Rabbit on it. Set out early, but not too much before stores open. Head north. Don’t forget your earbuds. Prepare to spend about 4 hours listening to Trout Fishing in America, which will lull your brain into a state of hypnosis. This will help you focus on the recipe at hand, still as yet unimagined. Drop into a little party supply store that is almost always closed, and for no good reason buy a few 3-inch tinned brioche molds for $2.40 each. Keep going north. Stop in the famous San Francisco Boudin Bakery chain, which you haven’t been in for about a decade, when your son was taking guitar lessons and the other son wanted clam chowder in a sourdough bowl. Buy some sourdough and wonder, as always, how that the particular lactobacillus strain can survive the heat of Stockton. Keep walking north. Imagine stuffing the bread into the brioche molds. Pick up some vodka (best to plan ahead) and put it in Oswald. Buy some olive oil, the last drop of which you used last night. The backpack will begin to sag by now. Richard Brautigan will make you say Trout Fishing in America when the person at the cash register asks if this is credit or debit. When you finally get home, cut the sourdough into thin three-inch rounds with crust all around. Butter every surface, including the sides, your hands, and the top of your head. Suddenly remember that although you have no trout, there are chunks of salmon, well salted, strewn with dill and splashed with Linie Aquavit, which is better than any other because it has crossed the equator. Unlike the salmon, who only went upstream. But they didn’t have a ship, which is why they die after spawning. The people who bring Linie Aquavit across the equator, they do not die after spawning. Squish your buttered bread, but not your head, into the brioche molds and fill with a few nubbins of cured salmon. Nibble on the salmon, then remember that you put the vodka in the freezer and make a drink with lime, sugar and lime-flavored seltzer so you can bear out the 15 minutes you arbitrarily decide will be the time this recipe takes to bake. Preheat the toaster oven. Crack and egg, add a pinch of salt and pour into the molds. Whisk the brioche molds into the toaster oven and sip your cocktail. When the bell goes off, remove them, take a few pictures and pry them out of the molds and take a few more. Eat the whatchamacallits with your cocktail. Oh just call them Trout Fishing in America. Mayonaise.

Were I to tell you that this recipe is highly reminiscent of a peanut butter and jelly sandwich, you probably wouldn’t believe me, but it’s true. Idli, from Southern India, are soft cakey rounds that are oddly like white bread but pleasantly sour and made entirely from fermented rice and beans. Almond butter is more nuanced than peanut but either would work well, and the chutney is infinitely more vibrant than jelly. Combining these ingredients also came to me entirely serendipitously. About a decade ago I planted a little persimmon tree at the corner of my house, where it received next to no light and even less water. I vaguely remembered it was there, but it never bore fruit and never grew. This past season we trimmed back nearby trees and fixed the sprinkler. I happened to be poking around in front of the house mid October, and what do you know? Three gorgeous fuyu persimmons, crisp and sweet and ready to go on the idli I had just steamed for breakfast.

In terms of cost, I bought a large bag of basmati rice for $5.99 and beans $2.99. To make the idli batter, I used about a dollar’s worth of rice and 50 cents for the beans. The almond butter was already in the cabinet and the persimmon, free. So breakfast for me, just a cup of the batter, of which I had about 7 cups, so that means this cost 21 cents. I tested it a few times to get the cooking time right, so let’s be fair and say 63 cents to test and 25 cents for the other ingredients – a shallot and a few raisins, a spoon of almond butter. Eminently affordable, unusual, and quick. The only thing you need to start ahead of time is the batter, but it takes very little effort.

Put the rice in one large bowl and the beans in another. Barely cover each with water. Cover with a dish cloth and allow them to ferment for 2 days. Next put them together in a blender and process until smooth and the consistency of cream. Return to the larger bowl and cover. Let ferment another two days, stirring a few times each day. Don’t be alarmed by any errant aromas the bowl may emit. It cannot go bad. It’s simply adjusting to your house and the lactobacilli are multiplying, fending off other bacteria. At this point it should be frothy and thick and resembles whipped egg whites. If your house is hot it may go quicker and the opposite if cold.

Then generously butter a small bowl about 4 inches in diameter and pour in some batter, about half way up. Place the bowl into a steamer and cook for 12 minutes. A smaller bowl will take a little less time, larger more. Remove from the steamer and let cool for a few minutes. Run a knife around the perimeter to loosen the idli and turn out onto a board. Slice the idli horizontally so you have a top and bottom, like a little bun. Spread the almond butter on one side.

When you put your idli in to steam, peel and chop the shallot and start to cook gently in the oil. Peel the ginger with a spoon, slice and dice finely, then add to the pan. Chop the persimmon finely and add. Likewise chop the raisins and add them. Splash with vinegar. Ideally this should be cooked just enough by the time your idli are done, about 12 minutes. Or let cook a few minutes longer if necessary. Put a good dollop of the chutney on top of the almond butter, close and serve up, just as you would a PB&J sandwich. 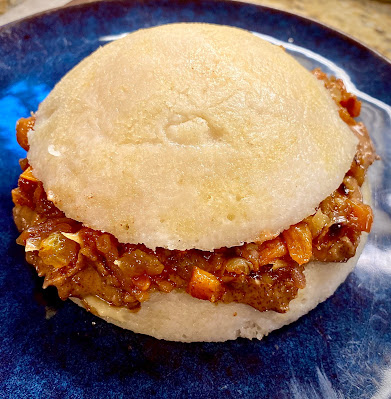 I am fairly committed to writing a book about breakfast now. This very simple, quick and easy dish I made this morning has me excited to send out a proposal and get the ball rolling. I'm up to 16 recipes in the past few weeks, pretty much one a day. Well, here's a sample: 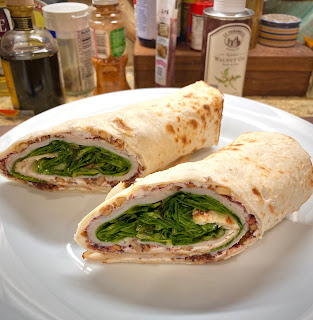 
Warm the flatbread over an open flame. Then spread with the chevre and squirt on the umeboshi paste. This is a stand in for cranberry sauce, it’s more sour, salty and sits in the wrap better. Spread it around evenly. Heat the crushed walnuts in a nonstick pan with the sugar and salt and cinnamon, stirring constantly and being careful not to let burn. Transfer to a plate to cool. Then sprinkle on the flatbread. Add the slices of turkey. In a small bowl mix the vinegar, syrup, oil and salt to form a dressing. Add in the spinach and mix with your hands. Then transfer to the flatbread. Roll up the bread tightly, cut on the diagonal and serve at once.