How to Get Kids to Eat Good Food

Jon Deutsch just asked me this intriguing question, and I thought since I have already spent the whole day writing about seaweed, algae and edible cyanobacteria, I would post my response here for kicks.

To get my kids to eat good healthy food: first I put on my spiked helmet and parade around the house muttering obscenities. Then I brandish a pistol and ask who wants to spend the night in klink?

Actually I don't get my kids to eat good food with flavor. They eat mostly crap, and get away with it because their mom is very picky and wont eat what I cook anymore. So it rubbed off on them - they get whatever they want mostly. I must have done something really bad in a former life.

When it does work it's usually because they have cooked with me (sometimes they will cook something and then not want to eat it though!) or because they know a friend eats it. Or it will just be some bizarre arbitrary dare. Like when I dared my older son to try soy sauce, and he got addicted. Or the younger one who loves goat cheese. Somehow they never got addicted to natto or durian though. But he is a real conoisseur of pickles, actually both sons are now. (Must be "Bubbies" - older son insists they be sliced lengthways, younger one in rounds like spongebob does it.) And they do eat some foods that few people in their right mind would eat - like super sour candy for one. Which actually I like too. I think the dare factor is underrated, but you have to be a dad with a fifth grade mentality to pull it off.

So there's my advice - never coax or chide or threaten. Dare.
Posted by Ken Albala at 4:05 PM 8 comments:

Oh Pig Where Art Thou?

I have been having explicit dreams about pigs this week. It's all Ustach's fault - he told me to watch some slaughter scenes on You Tube, and I listened to him. They were gruesome, but unlike most people, they made me hungry. And he intimated to me that actually catching a wild boar at "the ranch" might be possible. I'm game - or rather it's game.

So in the middle of writing about mundane species of the Cucurbitacea clan today, bitter melons can be very enticing, I had to stop and write about pigs. I mean whole cochinito pibil, or the glorious porchetta from Monte San Savino - do my pals from Boston remember that? And then Chef M goes and writes me about a way they salt pigs in China and let them hang like ducks I guess, and then roast them. Oh Charles Lamb, I can hear you churning up the dirt in your grave for some of that.

There must be some pig-synergy in the air this week.

I did attempt a whole hog once. It's a funy story really. My colleague Edie's husband Rick bought it, and we prepared a Hawaiian Umu at his house. Or at least tried to. He lived then in the hills above Castro Valley, which is solid rock after a few feet. So we really never really did dig deep enough.

BUt it was impressive, wrapped in banana leaves and a wire cage. Laid upon hot rocks and then covered in dirt. We let it cook, or try to cook for about 8 hours. It might have worked with more depth, more fuel, and especially if he hadn't watered the area in fear of his fence catching fire.
It had to be popped in the oven for a bit longer, not an utter disaster. But I am convinced it can be done.

Or maybe I could buy one of those Chinese boxes they use in Miami. I know confusing to me too. The pig goes in an aluminum lined box, and the coals go on top. I saw some You Tube videos of it this morning and it looks quite promising. Though I really do think a spit would be more fun.

Patience, I will figure out a way. And rest assured, you are invited!

Grapefruit and the Absurdity of Devotion 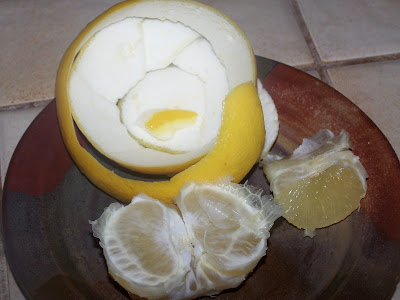 If you spend just a moment and stare at this image, I insist that you will begin to experience an olfactory halluciation. Focus now. Can you smell the acrid grapefuit peel? And the sweet acidic flesh? Is your mouth beginning to pucker?
I put this here because it was the sole fruit specimen of a little tree I have been arduously nursing in a big blue pot beneath the trellis for the past year. I really thought it was an orange. And now I have no recollection of where it came from.
When I figure in man hours how much time I spent watering it, and singing to it, only to see every floret drop off but one, and then to look outside the other day in a rain storm to see my orange - er grapefuit - on the brick patio. Ugh. There's my thousand dollar citrus fruit!
Of course it was the best grapefruit I had ever tasted, fragrant and luscious - I peeled it carefully to preserve the zest and separated each segment from the membranes. And let the little golden beads sit on my tongue until I crushed them one by one, like caviar.
I gave a piece to my 10 year old son, who grimaced, promptly spit it out. And ran to the sink to wash his mouth out.
But I swear, as I'm sitting here writing this in my office, I can smell the grapefruit still.
Or maybe I'm just exhausted after a week of writing.
Happy Nude Year!!
Posted by Ken Albala at 1:48 PM 6 comments: