Ok, I just couldn't wait to post this. I think an edited down version will eventually go on You Tube and be used for book publicity, but right now here's me making sausages by hand in my kitchen with no equipment. About 20 minutes long. Shot by our own Chris Martin. Take a look at the clips on his site too, they're fabulous. www.chrismatica.com

Notice in the back Sadie playing dead, and the jingling noise which is Buster at my feet.

There are so many exciting things afoot! Mostly thanks to the wonderful leads I have had from fellow food bloggers recently. Kathleen, I think, told me about a site that sells distillation equipment for rosewater and the like. So arriving imminently is a copper still, so I can begin my second career as an alchemist. Dr. Steeven's Water awaits.

Then Deana tells me of a place to buy ambergris in New Zealand. I am on it! 80 bucks for a couple of ounces??? All in the name of research. Bartolomeo Stefani calls.

Someone else - oh it was Hugh Plat!! 17th century, tells me about gum tragacanth. It was partly seeing Ivan Day's lovely sugar sculpture at the MET, but I had to have it. And I will try to throw it on the wheel. Why not?? Real edible sugar plates. Or molded if the wheel doesn't work.

But most importantly, is a movie, shot last week by Don Christobal, featuring me making sausages all by hand with no equipment. I'll give you a link here when it's edited, right now an hour's work boiled down to 20 minutes of documentary, but I think it needs to be more like 15 or 12.

In the meantime, here is today's diversion, as Eddie would say, my going all medieval. Meaning rampant excess with spicerei. Eminemently fitting as I happened to be talking about it in history of medicine class on Friday and in Tudor and Stuart England. Both now in the mid 16th century by chance. So here you see coriander, cardamom (green and brown), long pepper, star anise (which I don't think is authentic but I'm out of aniseed) mustard seed, grains of paradise, nutmeg (still in the shell with the mace) juniper and cinnamon. I had a very hard time resisting the chili peppers - but definitely not appropriate. 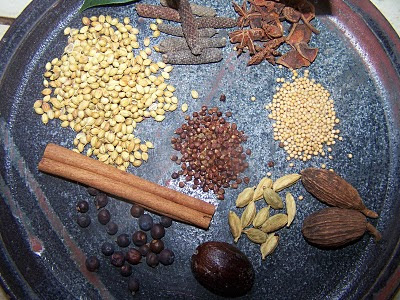 Spices were toasted, coarsely crushed and then set aside. Then a mix of salt I smoked over oak (this is a completely random experiment) (3 tbs) with pink curing salt (1 tsp) some muscovado sugar (2tbs) all rubbed on a 4 pound piece of really fatty brisket. Then the riot of spices. All in a big plastic bag, which would can see here. Weighted and thrown in the fridge. Though really I should put it in a barrel in the basement. Well, in about a month, I'll take a look at it. YES, preserved, not just flavored. I'll take it out and steam it for several hours. Maybe it will be a really agressively spiced pastrami with the smoking step skipped, but not using liquid smoke or anything like that. We'll see. 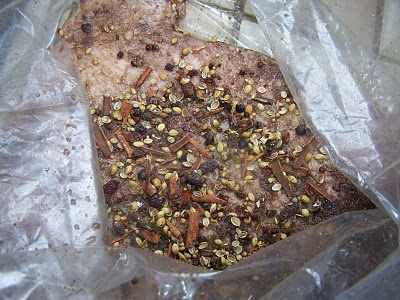 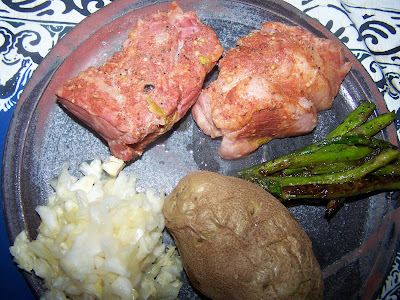 About a month ago I saw some pork shoulder for sale. Country ribs, for about 5 bucks I got maybe 5 pounds. And on a whim wondered what would happen if I cured them the way one does corned beef. Lots of pepper, coriander, bay, juniper, pink salt, maple sugar. Sounding good huh? Into a ziplock and into the fridge. Then I forgot about it. I mean, the whole point of curing is not to use it after a week, but preserve it, right?

The first shot was a few nubbins poached for about 2 hours with shallots and celery. Gorgeously juicy and spicy. With my sauerkraut, scorched asparagus and a baked potato.

Then things went a little over the top. Why not shreds of meat, sauerkraut, gruyere mustard seeds on a pizza crust? Much the same as a Reuben. Absolutely delicious. 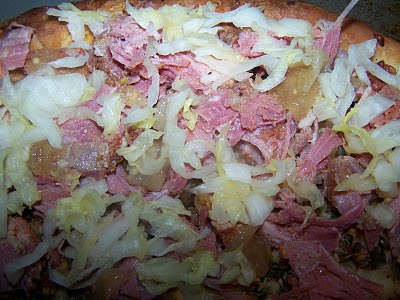 Romp through the Gastropolis

I've been in the city the past 5 days. Yes, THE city, NYC. Primarily for a symposium at NYU on food collections in libraries, but otherwise for food itself. Not necessarily fine dining, mostly ingredients, a few proper meals, mostly grazing.

Chinatown, which is nothing like San Francisco's, seems to have been expanding since I lived in NY. Still very little to offer tourists. But the shops teeming with live fish, bizarre vegetables, bins of dried mushrooms, scallops and other unidentified medicinals, remain unchanged. Thankfully! The highlight is Ten Ren's Tea Shop. The King's Tea is among the most wondrous and weird things I have ever consumed. It enhances all other flavors, intensely so. I can still taste the potful I had this morning. I have no idea what's in it and I'm surprised the foodies haven't identified it as a miracle tea, 7th flavor, or something like that. (I just figured out, it's flavored with ginseng!)

Then there was The Pilgrimage. Despite what I have written on this very blog, Langers in L.A. does not even come vaguely close to Katz's. I can not even imagine what made me suspect so. 15 years without the real thing, no doubt. The place was packed, but service excellent. The pastrami literally made me swoon. The owner and I kfetched about David Sax's book Save the Deli. I liked the book a lot. But written by a guy from Toronto?

Dinner at Otto was as expected fabulous. Mario does do a mean pizza. And though the place was crammed to the gills, it was exquisite. My genes notwithstanding, my soul is, I admit, Italian. SO, does anyone remember Stuff Yer Face on Rt. 18 near New Brunswick? Where Mario started.

There were other forays, to the Upper West Side and Zabar's. Kaluystan's in the 20's for spices (all available on line now, but still) even a mad dash across the Brooklyn Bridge to Atlantic Avenue for the Lebanese shops.

The irony of the whole trip is the last night I thought I'd treat myself to a proper meal, at the uber-hip hotel at which I was put up. And I got what must have been food poisoning. If you don't mind such things, Faustina was very tasty. The aftermath I do not recommend.
Posted by Ken Albala at 2:41 PM 6 comments: