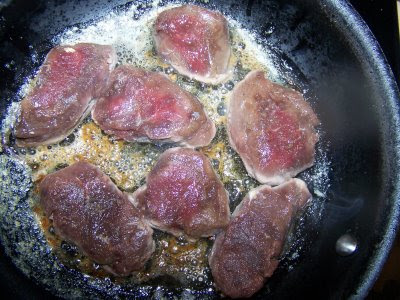 I have finally begun experiments and writing the last section of the antiquated cookbook on curing meats. I was hell bent on making my own saltpeter, and may yet if I have the pluck to scrape crystals from a pile of manure and use them for food. Then I thought of buying pure potassium nitrate, which is sold both by chemical companies and witchcraft websites. Seriously, for use in spells to calm the ardor of an errant male lover. For the moment I think it should be instacure so maybe readers will be able to follow. My first pastrami we ate this week and it was heavenly - cured, smoked and steamed - but brownish for the lack of nitrates. I'll try it again, though why it has to be red, I'm not sure.

What you see here is not cured, but first a filet of antelope brought to me from out of the blue by the goddess of game. Apparently from Wyoming and fed upon wheat gleanings. They were just lightly browned in butter with a dash of maderia for a pan sauce. And antelope meatballs made from an unidentifiable cut, below. I still have another hunk and was considering corning it following Hank's directions, but I don't think it's anything even vaguely brisketish. Nor have I gotten my package of instacure yet. So who knows? Maybe a fresh sausage. 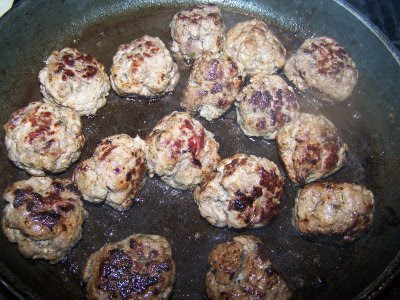 In the meantime, Happy Pesach. And to close, my recipe for matzoh brie as I only I make it.
Take 2 pieces of egg matzoh and break up into small pieces. Soak in milk for about 5 minutes and drain. Add two eggs, some roughly torn turkey - I told you no one makes it this way - some capers, whole grain mustard, tarragon and bits of cheese (either mozarella or something like swiss). Then scramble in a pan with butter. Who ever tells you it should be a solid pancake shape is an unredeemable heathen. You want to cook it so each piece is separate, and dry and the cheese melted and browned. Then put it in a bowl and eat with chopsticks. I dare you, it is fabulous!
Posted by Ken Albala at 9:06 AM 11 comments: