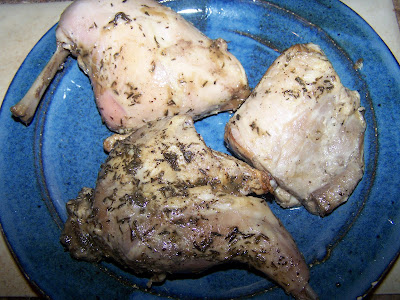 Roast the rabbits very well and then cut them in pieces and place in a new pot or in a similar glazed earthenware vase, placing between the pieces of rabbit laurel leaves and a bit of chopped sage, and then make the escabeche and put it on each in a way so the pieces are well covered witht he escabeche, and make the escabeche in this way: Take two parts of good white wine and one of strong vinegar, but in this you must take consideration if the vinegar is strong or weak, because if it is weak it will be necessary to add more, and add enough lemons cut, and grind cloves, pepper and ginger and a little nutmeg and let it boil, salt to taste and put over the rabbits, but be advised that the rabbits must be cold when you add the escabeche. Some add a little oil in this escabeche and for rabbits it works but not for partridges or other birds.

This is a recipe I prepared and spoke about in NY a couple of weeks ago, but I couldn't say much gastronomically because I wanted to leave it on the shelf for a few weeks to thoroughly pickle. I was a little apprehensive. Stop and think about it, rabbit sitting at room temperature for a few weeks? I guess if you've got to go, might as well be worth it. In the end, the flavor was quite intriguing, sour but with serious bitter and aromatic notes from the lemon peel and bay. Definitely worth a try. And incidentally, this manuscript was just published in facsimile from a unique copy in Vienna. I venture to guess this may well be the first translation of this ever made into English. And as for tasting it, I might be the first person in 450 years. Or maybe all the others were poisoned.
Posted by Ken Albala at 10:56 AM 5 comments: 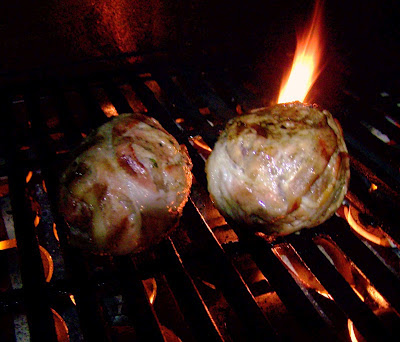 The eggs that willed itself into being. They are first pickled with beets to make them pink. The tops removed judiciously, the yolks excavated and devilled with a touch of mayo, green chili pepper and oregano. Then put together again. Then encased in freshly chopped pork shoulder, seasoned into sausage meat. Then, in lieu of proper caul fat, some bacon is carefully slashed intermittently and stretched into a netting that is wrapped around each. Then they are set to cook in the barbecoa, napped with a tart tomato and lime based sauce. And voila. 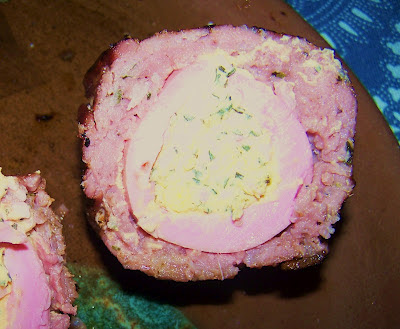 Sliced open, and amazingly everything stays intact. I think if I ever try this again, it should go on a stick. Definitely Fair Food. The other perversity was a small pickled quail egg wrapped in meat to cure into salami. I'm hoping the egg stays good in the month or so the little salami olives take to cure. We shall see! 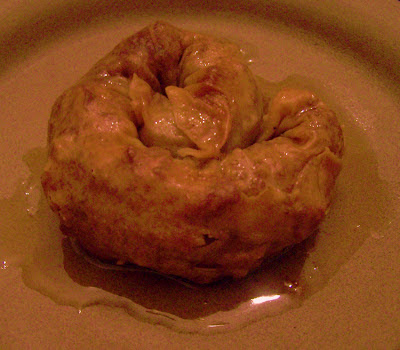 Chanelling my ancestors today. If you have some leftover fresh pasta dough, as I did, made of high protein bread flour, just roll it into thin rounds. Then stretch as far as it will go. Brush with butter, sprinkle with sugar, a layer of walnuts and cinnamon. Then roll up and curl into a coil. More butter and bake. When it comes out barely moisten with rosewater and honey. I think this is far more intriguing than the syrupy gloop cut into diamonds. Still has crunch, is drier and less sweet. The pastry is balanced with the filling. Now go make some. There is probably no dessert easier or cheaper to make when you have a few spare minutes.
Posted by Ken Albala at 5:53 AM 4 comments: 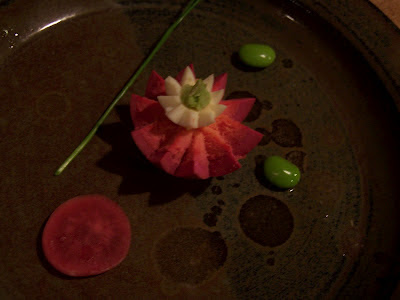 I was flying home last night after a fabulous cookbook conference in NY, reading a cooking magazine that shall remain nameless. Perhaps I was in a critical mood from the surfeit of discourse, or maybe it was just clarity only afforded to the hung over, bloated and exhausted on multi-stage cross continental flights. There were a few devilled egg recipes in the magazine, SO very lacking in inspiration that it afforded me a few hours of private amusement thinking of better things to do with an egg. This is only the nicest looking. I usually don't fuss with food, but this cut of a pickled chicken egg holding a pickled quail egg, holding an edamame puree, with random pink pickled radish and chive, I think looked too nice to pass up. Equally fetching was the same red egg (for Valentines!) with it's yolk devilled, restuffed, spiked, similarly stuffed with another egg and various garnitures from jars on the shelf - corn relish, sage leaf, pimento. They got too noisy and crowded to show, but they sure tasted fabulous. NEXT step, add a smoke element. I'm thinking of pickling, then lightly smoking, then stuffing. With pancetta garnish instead of soy. Send some ideas. Share your pictures too, I'll post them. It has GOT to be better than the dumbed down drivel that's out there now folks.

Ah, Here's another idea I woke up with today. Boiled, Pickled, Devilled, then Scotched!
Posted by Ken Albala at 8:03 PM 6 comments: 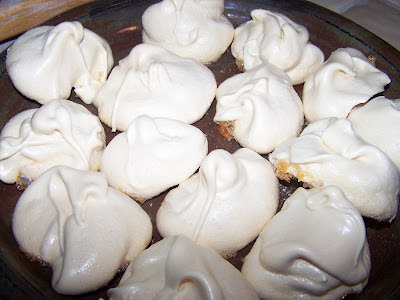 I know everyone is into meringue the past few years. But I have been trying to perfect them for at least 30 years. By perfect, I don't mean your standard French or Italian meringue. I mean those my Auntie Fanny made. YES, I had an Auntie Fanny. My grandfather's sister, from Kastoria in Northern Greece, who spoke Spanish as her first language. Sephardic. I saw her last maybe in 1972 or 3. She made these when I was still very small. And I've been trying to do it ever since then. Seriously. And on a completely random whim, after using a ton of egg yolks, there were all these whites. And I think I've finally figured it out: almond extract! Here's how. Whip egg whites by hand with a jot of cream of tartar. Tiny pour of vanilla and almond extracts. Add powdered sugar, about a cup per three whites. Beat until stiffer than the devil. Drop onto paper bags torn up, I remember this detail. Bake for about 4 or 5 hours at 200 degrees. Let cool. For me they evoke her apartment in NY, that was very high up with a window open and I remember her worrying that I would fall out. I'd never been so high up in my life. Except for right now.
Posted by Ken Albala at 5:30 PM 4 comments: 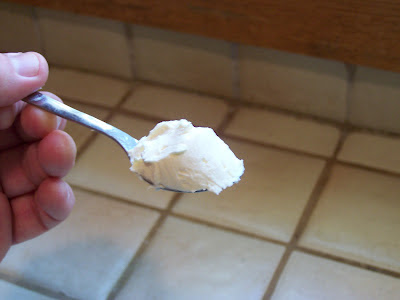 Every now and then it's good to notice you've been talking a particular talk but not walking the walk: I've been saying for a long time that milk or cream just left out rots if it's pasteurized. But raw milk naturally ferments. Have I ever just let it do that? On the counter and unattended? Last week I was making butter, which ended up going into a bizarre 16th century recipe I'm talking about next week at a cookbook conference in NY. Let me just say this recipe I'm pretty sure has never been translated into English and I doubt has been cooked using original techniques, at last for 400 years or so. So I had some raw cream left over. I just left it out. And in one week this is what happened. Not very sour, rather pleasant and buttery. I'm not sure if it's creme fraiche or clabbered cream or what, but it did it to itself. GOT to love bacteria!
Posted by Ken Albala at 1:39 PM 7 comments:

I have a remarkably weird cat. Ray likes to thumb through the cookbooks. It's rarely the same one, so he has clearly been looking for a specific recipe for some time now. Nope, not in Julia. Jeff Smith, you must be kidding? So this morning he pulls out The New Basics 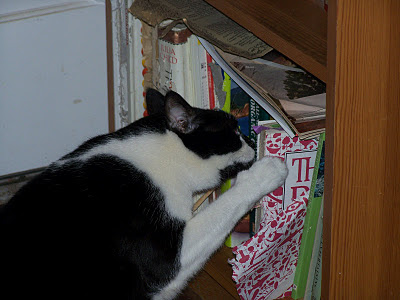 by Julee Rosso and Sheila Luckins. I am NOT kidding. He opens it quickly, I think finds what he wants and rips a page out, then crosses his arms and sits on it with a satisfied look on his face, waiting. I've long been wondering who leaves the dirty pans in the sink. And where those stray bits of bulghur wheat tabbouleh came from. He has very clearly been teaching himself how to cook so he doesn't have to eat cat food any more. Normally he waits till I'm gone to start reading, but this morning, I guess he couldn't wait. And for some reason he didn't think I could put two and two together - that he's the one messing up the kitchen, and then pretending it was the kids. 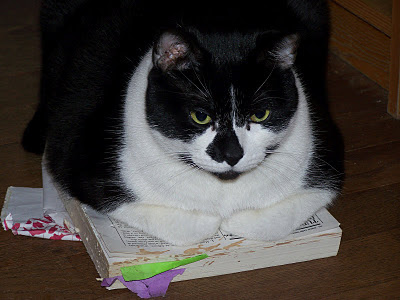 So here's the bigger question: do I invite him to cook with me, and just pretend the whole thing never happened? Or do I confront him, and tell him to stop tearing up my old 1980s cookbooks. Actually I never knew he could read either. What other things do you suppose he's been keeping from me. OH! That's why the pickles have been disappearing too! He's been nibbling on them. And look how he's just sitting there as if nothing's happened. Opposable thumbs apparently are not such a big deal folks.