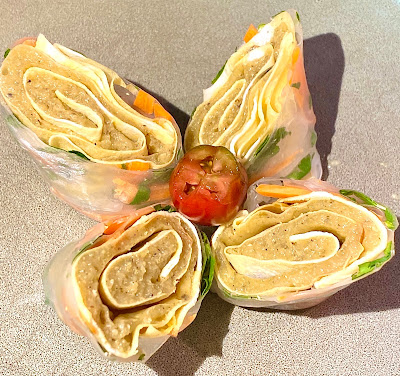 Have you ever considered how many cultures roll things up in starch or a bread-based wrapper? Burritos and spring rolls presumably have no real connection, but the flavors inside and the way they’re eaten are so similar. A good example of convergent evolution, two distinct species move toward the same solution, though unrelated. Like humming birds and bees sipping nectar from flowers. I decided to throw in another rolled favorite of mine. Though I seriously thought about shredded turkey or cabbage leaves, egg just seemed perfect and in terms of flavor, I think I was right.

In a pan or on a comal toast the tomatillos and chilies with a little oil until charred and soft. Remove stems from chilies and put in a blender with tomatillos and ½ c water and a teaspoon of salt. Blend until smooth. Then fry the mixture in the pan with residual oil. Set aside in a bowl.
Mix the tequila with the gelatin in a small pot, add ½ cup of the tomatillo sauce and gently heat until it barely comes to a boil. Pour into a greased square casserole pan and put in the refrigerator to set.
Mix the egg and dashi stock and cook in a large frying pan with a tiny bit of oil. Swirl it around so you have one very thin layer of cooked egg. Let cool on a large plate.
Unmold the jello on top of the egg. Roll both into a cigar shape and cut in two, trimming the ends if necessary. Moisten two spring roll wrappers with hot water and place on a board or plate. Sprinkle on cilantro and carrot. Place the cylinders of jello inside, fold in the sides and wrap up tightly. Chill again until firm.
Then cut each on the bias and arrange on a plate with garnish of lime or tomato or whatever you like. It doesn’t need a dipping sauce because the mole verde is already inside. It’s spicy, crunchy, chewy, and refreshing, all at the same time.