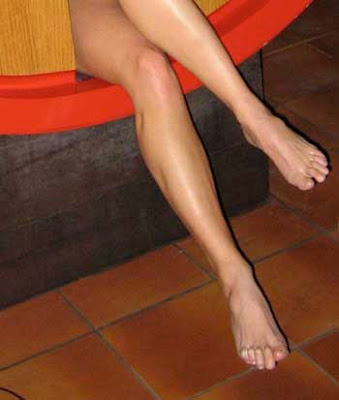 News Flash (literally) The International Wine Trade Commission has recently issued a report citing that certain Italian Vintners have begun using a secret ingredient to fortify their wines. Marketed under the label "Sbuffo di Fica" the new wine has been subjected to scientific tests which show traces of human pheromones and aromatic esters. Pictured here is the first shot of the new fortification technique. An entire naked woman is inserted into the wine barrel, and her body is vigorously rubbed into the oak staves for an unspecified length of time, sometimes as little as 5 minutes, but others suggest it may take as long as a full half hour. The resulting perfume left in the wine is said to drive men wild. Commissioners are now trying to decide if this constitutes unfair trade practices, adulteration, or is merely a harmless flavor additive, once transmitted into the wine during the time-honored stomping procedure, which used to involve women lifting up their skirts and inserting themselves up to the waist in the grape must. Winemakers claim that this procedure replicates traditional winemaking procedures and should not be considered a new form of fortification. The EU court in the Hague expects to render its decision on the Sbuffo wines later this month.
Posted by Ken Albala at 8:35 AM 3 comments:

After a week in and around Oslo, I was surprised that the Norse seem be genuinely embarassed about their cuisine. Or at least many meals at this food conference I was attending were "Provencal lamb" and the like, served with ruddy southern wine. There were some seriously Norsk meals too though.

The best thing about Norwegian food is of course its simplicity, freshness, and then some seriously funky cheeses and pickled things. And fish, oh my. One lunch explained by Astri Ritterwold was sublime. Microthin crispy flat bread, gravlax, smoked mutton slices, stinky gamelost, cold slices of venison. Incredible cultured butter. And unctuous aquavit.

The one night we had to ourselves I ate at this charming Habsburg yellow inn from 1700, called Stortorvets Gjaestgiveri. Slices of raw reindeer that melt in the mouth, with a tart goat cheese and bitter greens. I doubt it was traditional, but really tasty. Then a whale steak on green pea puree with caramelized onions. It wasn't fishy as I expected, but sort of livery, in a pleasant way. Very dark, chewy, sort of like beef but without the same muscle striations. It probably would have been great with red wine, but I thought a Ringnes pilsener and aquavit made more sense. It did.

Overall the food was really quite remarkable, flat open-faced sandwiches with shrimp salad, really nice pate, pickled herring, beets, caviar paste in a tube. And that was for breakfast. The rye was amazing. If only one could find the like here. Gjetost is really an aquired taste, though I do like it. Something like a cross between caramel and cheese. But what I am truly looking forward to trying is a bit of stockfish I bought in the airport. Not bacalao, nor salted I think, just air dried cod, as was eaten through the middle ages for Lent. I will fill you in once I've figured out how to cook it, though actually I think it was sold and meant to be eaten as is, for a snack. Sort of like Japanese dried cuttle fish.

Well, if you have a chance, and a big wallet, because everything in Norway is perversely expensive, I can highly recommend it, especially for lovers of fish.
Posted by Ken Albala at 8:27 AM 3 comments: