A LESSON IN CULINARY HISTORY 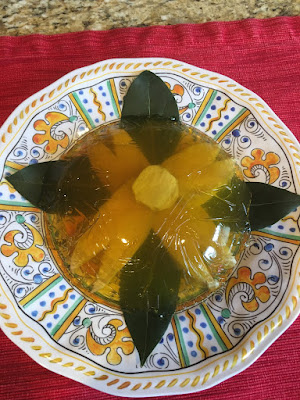 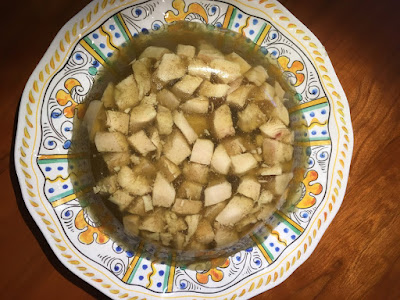 A Lesson in Culinary History

Lately I have been playing obsessively with alcohol laden aspics. Think of these as sophisticated jello shots. I was overjoyed to find one such in Messisbugo's Banchetti published in Ferrara in 1549. It's basically a Capon in Gelatin. Made with a bottle of wine and a riot of spices. Here's the recipe translated by me.

Take a capon and the feet of four capons, and place them to boil in sweet white wine, until it is cooked, and when it's cooked, take the flesh, the wings, and whatever you want to cover, and let the rest boil together, and let it cook well, then place in a little spoon of vinegar, half a pound of sugar, or honey, an ounce and a half of cinnamon, a sixth of pepper, and a quarter of ginger, a sixth of mace, a little saffron, then pass this decoction through a sieve, and have your little plates with the reserved capon at the bottom and bay leaves, and pour it over, let it cook and it will be good.

When I first tried this it was with 2 packets of gelatin, a chicken breast and most of the recipe followed closely thereafter. But half a pound of sugar sounds ridiculous, so I added about a tablespoon. And more than the tiny spoon of vinegar. It was for a film shoot I did yesterday for Matthew Arnold, a distributor of a new historic recipe archive who commission this. I'll share the video when it comes out. Version number one looks gorgeous. Clear aspic, the chicken lightly poached and cut into a lovely shape, underneath are the bay leaves Messisbugo calls for. Only one problem. It tastes AWFUL! It was the pretty version I made ahead and it was showed at the end of the video. As a historic exercise: epic failure.

Happily for the video itself I followed the directions exactly. RULE #1 of all culinary history. FOLLOW THE DAMNED RECIPE. No short cuts, no second guesses, no substitutions. If you can't get the ingredients, don't make it. For this I used a rooster, head feet and all, plus the extra 8 feet. All found at the SF Asian Market here in Stockton. And I used the Renaissance half pound of sugar - which is 12 ounces x 1/2 or 6 ounces or about 12 tablespoons. Sounds excessive? Absolutely not. The second one is remarkably delicious. Not too sweet at all, but beautifully perfumed, delicate and almost evanescent in its lightness. I can almost hear the Este Dukes gasp in wonder at the first mouthful.

So lesson learned. Follow the recipe and if it means sacrificing that instagrammable image, trust me, you will be happier in having made something edible. The author always knows best. 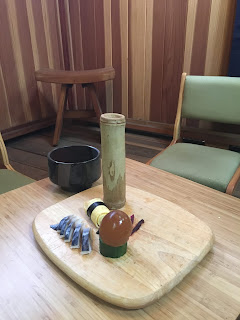 My jello shot odyssey has continued all week. This is sake and dashi stock, formed in an egg shell. Perched on a cucumber. Served with mackerel and an incorrectly rolled tamago, pickled eggplant and black garlic hiding back there too. Shot in my tea house. With a tea bowl I made.
Posted by Ken Albala at 1:59 PM 1 comment: 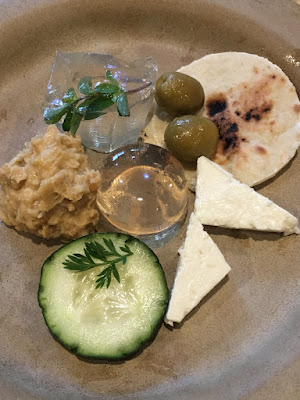 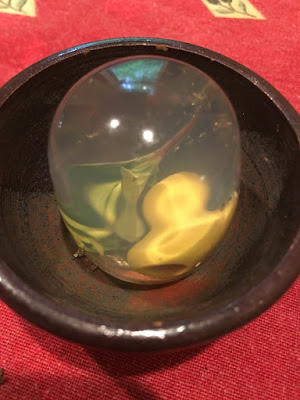 This is ouzo jello. Delicious with marjoram and my own olive inside. Or served with hummus, feta, cucumber and a tiny pita.
Posted by Ken Albala at 10:36 AM 3 comments: