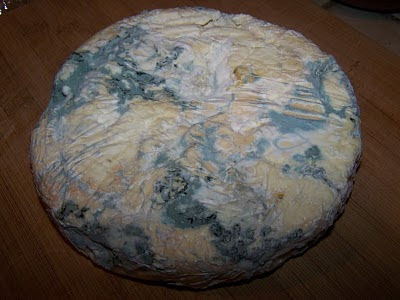 I just returned from the IACP conference in Portland. Pretty much one continuous party, the highlight of which was a butchery workshop: one half of a pig broken down in the French manner, the other half US. So, upon my return home I thought I'd check out some ongoing projects. Kraut worked nicely but the mandoline sliced the cabbage too thinly, so it lost some crunch. Note to self: stick with the knife. My new starter was actually fed in my absence and was potent enough to raise a big sourdough boule on the first try. I'm eating it right now for breakfast. Scrumptious. But do you remember that nice bright white cheese I made a few months ago? Eccolo! And I just happened to be talking about Alexander Fleming in class! It's actually the first thing I have ever made that I'm a little scared to taste. It smells ok, moldy of course and a little rank. I'm fairly certain this is what happens if you don't use raw milk. There was no lactobacillus in the milk, and so the mold in the "cave" just attacked it. The cheese right above it, now 9 months old, remains unscathed. Is the world not endlessly fascinating?
Posted by Ken Albala at 4:21 AM 9 comments: 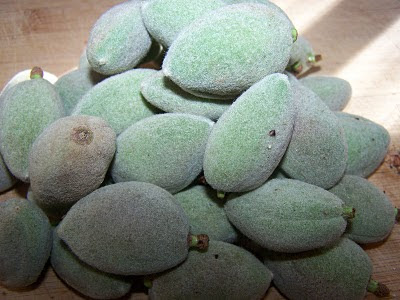 It must be because we have been demoted from the country's "Most Miserable City" to number two. I'm sure by some criteria, it may be true, but my Stockfish was in lovely form today. A sunny 80 degrees. A delightful little olive oil festival with local producers - I must have tasted a good pint and bought a little olive tree. Then Earth Day in the park across from my house. The Bad Goods rocked, great food songs too. And the market was small but right on. Fava beans already! And WHO has ever seen green almonds in a farmer's market?? Crunchy, slightly lemony and sweet. Is there something else one can do with them? A buck a pound!