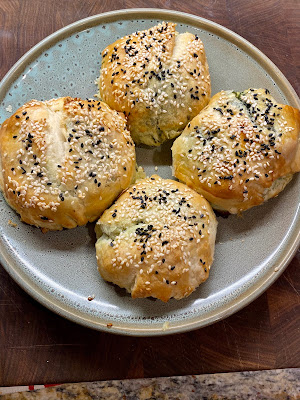 “My grandma was the best cook ever!” says anyone who has ever been interested in cooking and eating. I say the same thing myself. For years I have been trying to replicate her recipes from memory. She died when I was 13, so it’s mostly guesswork. One of these is boyos – a kind of round roll with spinach and feta filling. There were also other fillings, like onion and egg, ground beef too. I recall vividly one day exclaiming how much I liked them, so whenever I saw her, she would have made dozens just for me, to put in the freezer and have for breakfast every day. In all honesty, they were a bit dense and since she was Mediterranean at heart, she poured olive oil on top. My father would become incensed; he liked them fine without oil, but she insisted.

After a little sleuthing I found that boyoz, as they are spelled in Turkey, are still made in the city of Izmir (Smyrna) where my grandmother’s family came from, and they are still associated with the Sephardic Jewish community. Of course the name is bollo – and they come originally from Spain. They are often unfilled in Turkey and are made of a pulled filo dough, light like a croissant. Nothing like my grandmother’s.

So with this recipe I thought about how much better they would be light and flaky, so I made a simple yeasted and laminated croissant-like dough with butter. I also used broccoli rabe instead of spinach, because the oxalic acid in the latter strips the enamel off my teeth and makes them feel chalky. And because rabe is the best vegetable on earth, period. Use a good creamy feta too, ideally from Bulgaria, but French feta can be great too.

Mix the flour, salt, yeast and water and knead for about 10 minutes, keeping your hands wet with extra water (rather than dry with flour). Place pats of the cold butter on a sheet of plastic wrap and put another sheet on top. Roll it out into a thin square. Roll out the dough on a large wooden board, this time floured. Remove the top sheet of plastic from the butter and set it directly on the dough; then remove the other sheet. Fold the dough over the butter like a book and roll out. Repeat folding over and rolling out 4 or 5 times more, wrap the dough in the plastic and let rest in the fridge for an hour.

Chop the broccoli rabe, discarding the thick ends of the stems. Fry in the oil and season with salt. Cook over medium heat, stirring now and then, for about 15 minutes. Remove from the pan and place in a bowl to cool. Then crumble in the feta and add ¾ of the egg. Mix well. And set aside until the dough is finished resting in the fridge.

Roll out the dough on a floured board. Cut into four pieces. Place the filling in the center of each piece and fold over the sides, encasing the filling. Then turn them over, so the top is smooth. Brush with the remaining egg and sprinkle with sesame seeds.

Then heat the oven to 400 degrees. Bake the boyos for 10 minutes and then lower the heat to 350 and cook another 20 minutes until browned. Eat them hot, for breakfast of course. 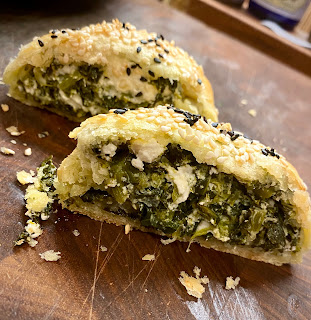