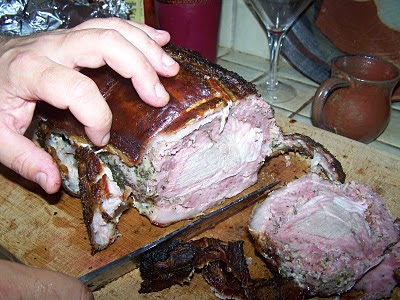 If you have a yearning for a really good porchetta, can't find a whole pig, and aren't on your way to Italy, here's a decent solution. First recognize that you are trying to replicate the architecture of the pig, which means you need good fatty skin on the outside. Easy enough if you buy some good pork belly. Butterfly it so it is opened flat. Then lay down some sausage meat, that's the pink you see here, chopped by hand, and then lay on a wad of pork shoulder. Put more sausage around that, roll on the sides of the pork belly - and be sure to use some skin to cap the ends too, then just tie the whole thing up. Roast slowly over a wood fire for about 2-3 hours. Let cool. Slice. It went beautifully with a green sauce of pounded parsley, roasted garlic, salt and lemon juice. In Italy you buy this from a truck, on bread. Un Believe Able.
Posted by Ken Albala at 10:10 AM 11 comments:

I find it hard to believe I've never entered a cooking contest of any kind. I'm really not a competitive type, but more importantly, I don't like losing. Still, I couldn't refuse a serious chili cookoff for Charles' 50th birthday. I think 23 teams. (And I did win.) This one is called Que Picante Puta Pipian. I was asked to post a real recipe. Here's as close as I can get:

First heat a few tablespoons of anatto seeds (achiote) in a cup of peanut oil for about 10-15 minutes and strain out the seeds. It will turn bright yellow. Then buy a 4 lb shoulder pork roast (with a nice amount of fat) and chop it coarsely with cleaver. Small pieces, though, not large chunks. It's all in the texture. Salt and pepper the meat, season with oregano and cumin and brown this in two tablespoons of the oil. Save the rest of the oil for other dishes. While this is browning take 6 medium hot large green chilies (I used fresh poblanos) and roast them over an open flame until blackened. (You can use regular green bell peppers too if you prefer no heat.) Put them in a paper bag, let cool and then seed and scrape off the blackened skin. DON'T wash them. If you can't get all the burnt part off, no big deal. Put the chilies in the blender with 2 cups of good chicken stock, 10 chopped green tomatillos and a cup of unsalted shelled pepitas (pumpkin seeds). Liquefy completely. Add to the now browned pork. Then heat a comal and place on it two cut up onions and let them char. Chop finely and add to pot. (You can also just brown in a pan in a little oil if you like.) Add two finely chopped cloves of garlic. Turn the heat to a simmer and add 2 cups of fresh orange juice and the juice of two limes. Continue to simmer for about 2 hours. Also add a single square of serious chocolate. I used a 72% cacao bar. I think at one point I also added a couple of handfuls of nopalitos to make it a little greener. It certainly isn't a traditional pipian in any sense, but tasted pretty good.
Posted by Ken Albala at 7:13 AM No comments: