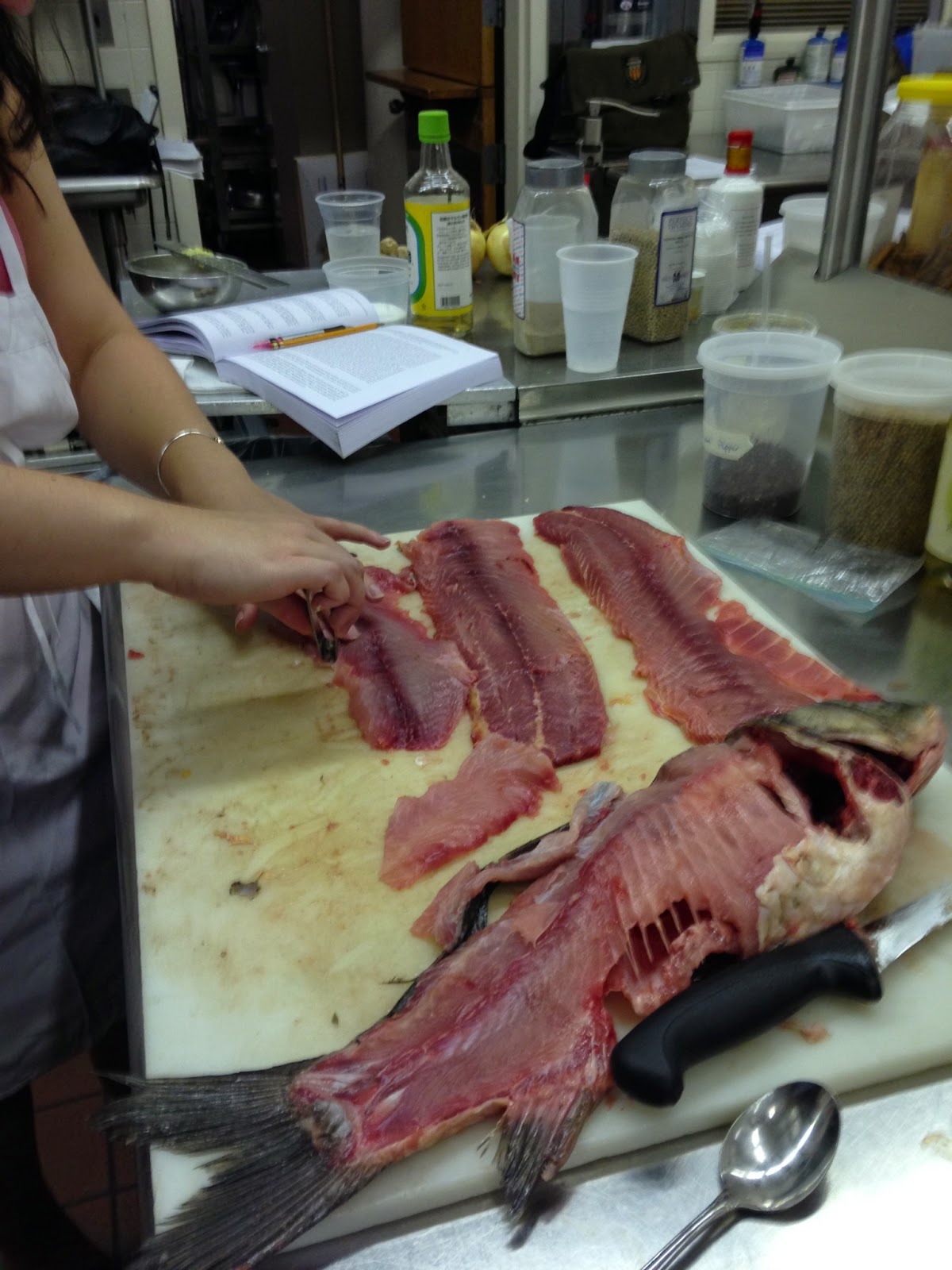 Latest update on the cooking as food history pedagogy: I went to Boston and got to cook with everyone in person this weekend. Most of the students I've never met. Those who live far away and a few others couldn't make it, but otherwise a nice dozen. I decided we would cook some 13th century Yuan Dynasty recipes, a selection of which is in my reader under the title Yin-Shan Cheng-Yao. The whole is in A Soup for the Qan, which has just come out in a new edition. What really attracted me to the recipes is the influence I've looked at often from medieval Baghdad going west to Europe, but this one goes east, under Mongol Rule, to China. So ingredients like mastic, chickpeas and saffron appear.

Most of them were pretty good, one recipe for chicken morsels with (handmade) vermicelli was spectacular, and sharp with szechuan pepper corns. A lamb and mastic soup was ok, probably would have been very good with more concentrated stock and the lamb cooked longer. Steamed poppy seed buns left a little to be desired for, but I think tweeking could make them great. Weirdest of all though was  a carp soup. It was clearly a pain to clean as you can see here. The stock turned out gray and the fish tasted muddy. Maybe it was just this fish, but I'm really hoping the students wont be scared into thinking people in the past had no idea what they were doing. I myself am wondering about carp.
Posted by Ken Albala at 4:10 PM 2 comments: 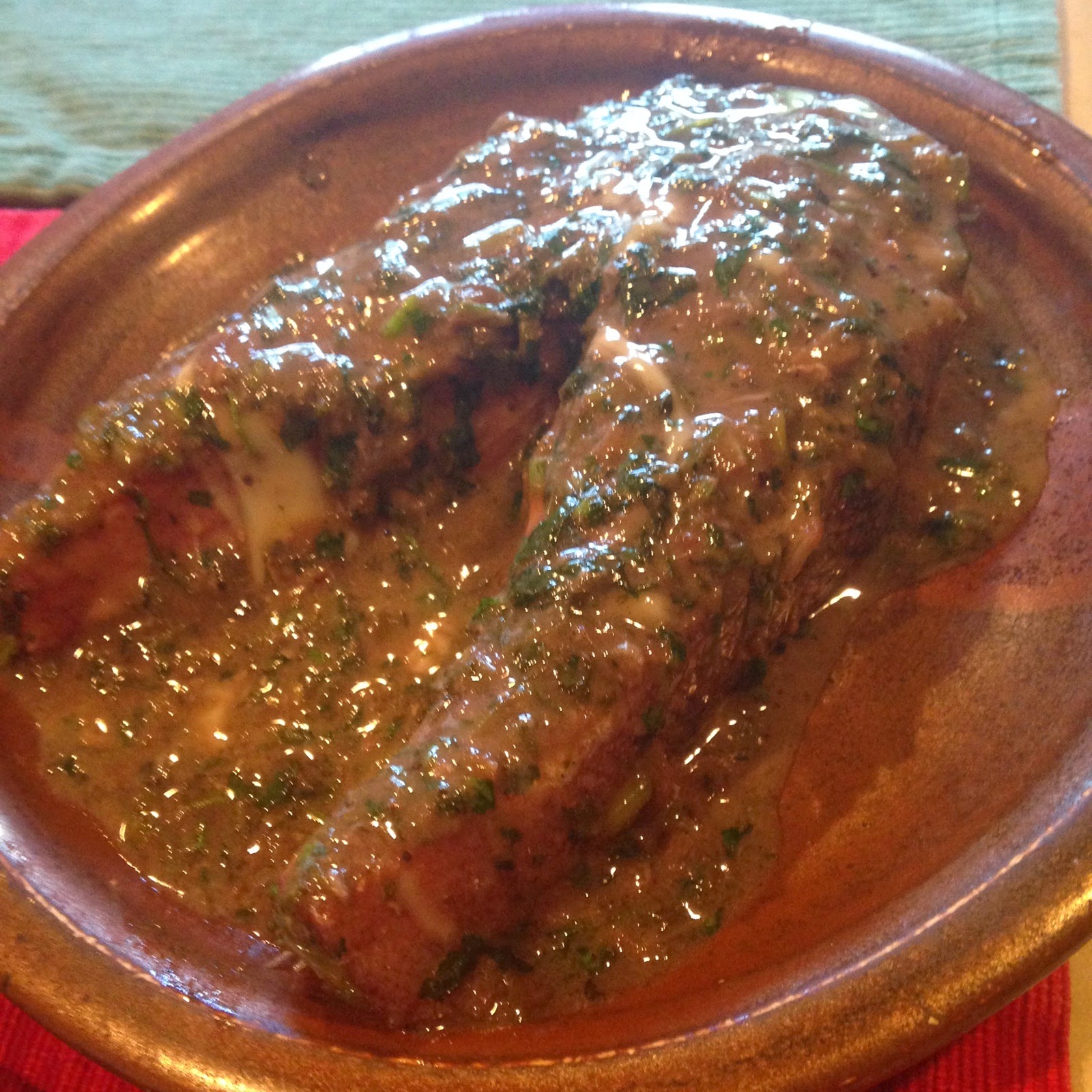 Hic est Patina Zomoteganona. That just means a plate of sauce in a frying pan, or something like that, made of any sort of fish. I've never cooked it before, but I think among Apicius' best.

Here's a really loose translation. Raw fish in a pan (this is wild salmon), add oil, liquamen (fish sauce), cooked down wine, and a bundle of fresh coriander and leek. Cook, then pound pepper, lovage, oregano, the cooked down bundle in a mortar, and pour in cooking liquid then (keep pounding) and pour back in the pan. Let fish cook through, add an egg and stir to temper, until thickened, sprinkle with pepper and serve.

The combination of flavors are exquisite. Whoever actually wrote this recipe knew exactly what he or she was doing.

Unfortunately adobe connect did not work at home, maybe my old computer or crappy connection. Shame with such great material the technology totally failed. On an off and after an hour or so I quit. But the fish tastes great. Try it! 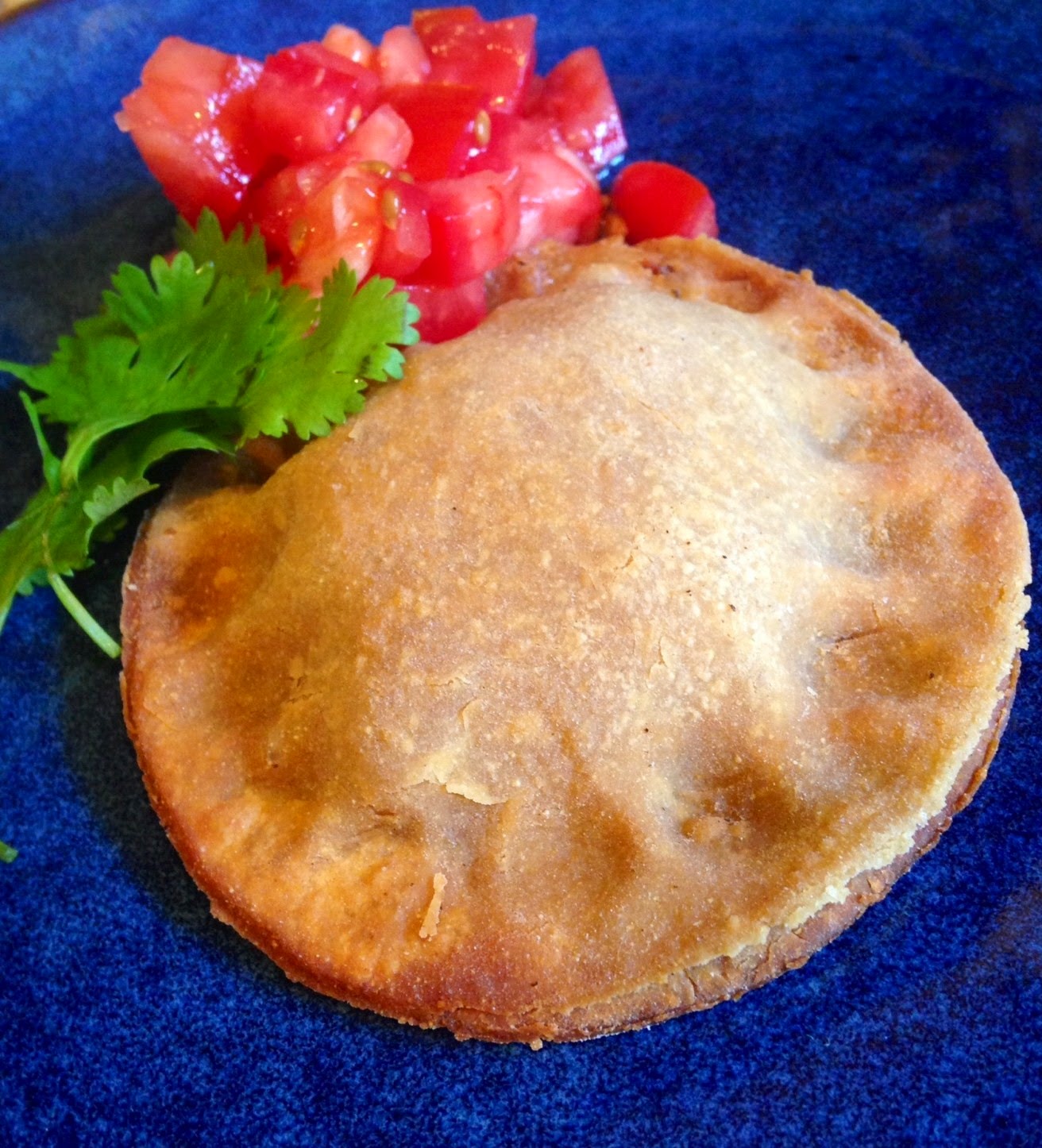 Just as there are professional disciplines of Music Therapy and Dance Therapy, is there also such a thing as Cooking Therapy? Well if not, there should be. So if you find yourself alone and depressed, here's what to do.

First pour yourself a big martini with your favorite olive. Two olives. Then look in the fridge and cabinets and contrive to make the most difficult dish you can with whatever is at hand, a recipe you have never done before. First a pair of turkey thighs I cured a two weeks ago called out to me. I pan roasted them. The effect is almost exactly like ham. This was cooled and diced finely.

Then I found some sweet potato flour (camote) from Peru, which I thought might make a fetching noodle. Well it did indeed. I rolled it out and made ravioli stuffed with the turkey, about 3 or 4 inches across. And then I fried it in the strained turkey fat, so really nice and crispy, like a pot sticker, but quite sweet and delicate. Chopped tomato and a little cilantro on the side. I like the American theme. Does it work as therapy? I don't know. But it tastes good and is a really good distraction.
Posted by Ken Albala at 12:48 PM 1 comment: 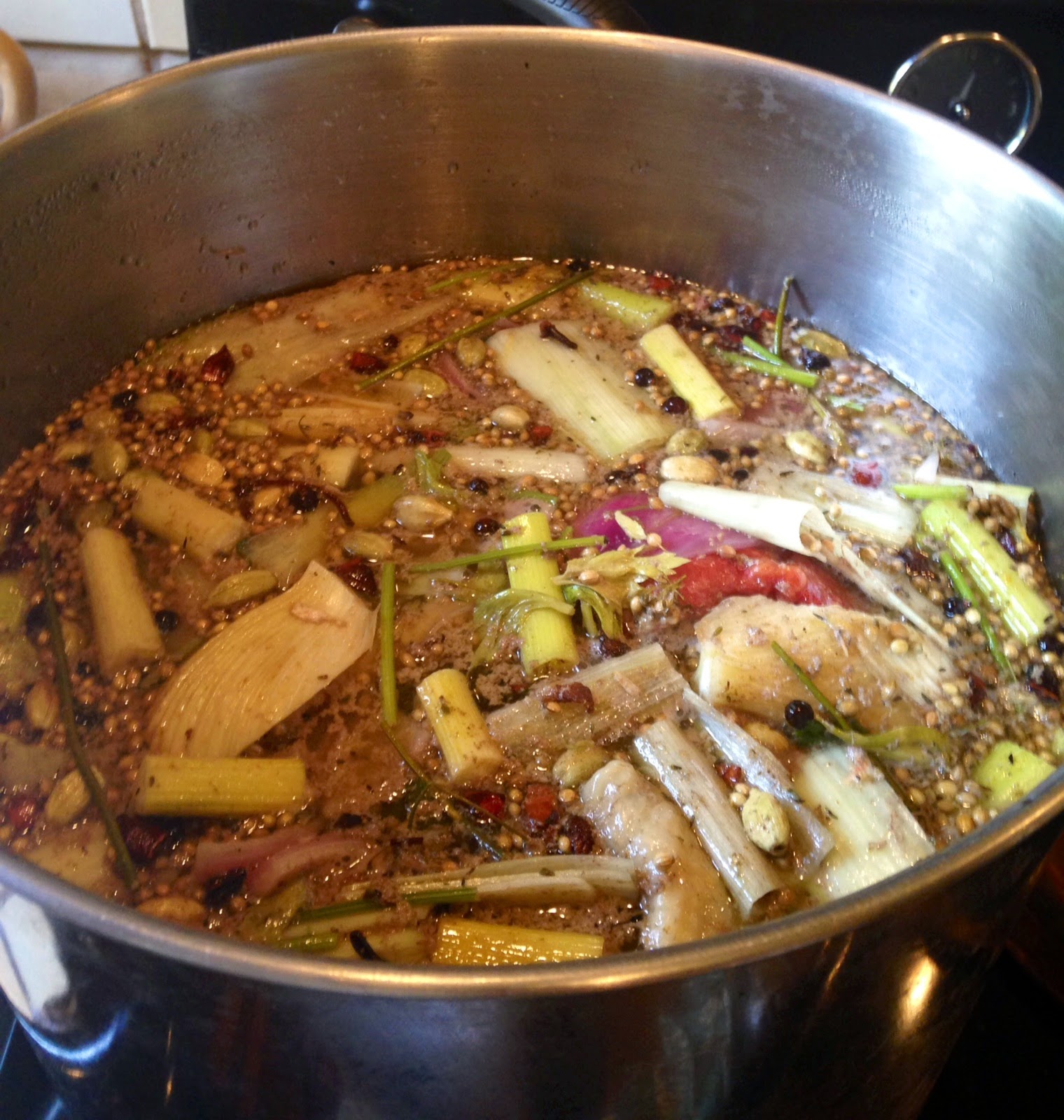 Every 6 months or so, I try to stuff something into my over-packed freezer and it just wont fit. In desperation I start pulling things out. I'd say a good third are bags of bones I tucked away with the best of intentions. As long as you perform this purgative ritual, you will not be disappointed. For me there are other freezer rites to observe: paying homage to Herman the eel is among them. He's been in there for about a decade and I don't have the heart to toss him.

Well, when you collect your bones, mine were an assortment of beef oddments, pig shoulder, lamb neck, chicken backs and wings, and a left over turkey carcass, toss them into the pot and cover with water. I also took the opportunity to clean the fridge of limp carrots, half a leek, some red onion, a sad bulb of fennel, celery tops, parsley stalks, mature dill and so forth.

And then I went even further and emptied the upper spice cabinet where I found star anise, coriander, long pepper, cloves, juniper, cardamom. You can tell where I'm going with this: PHO! After just a couple of hours the kitchen smells like heaven. So this is what angels eat. I'll give it maybe 10 hours at a gentle simmer, strain it tonight and have it for breakfast tomorrow with noodles and fresh vegetables. 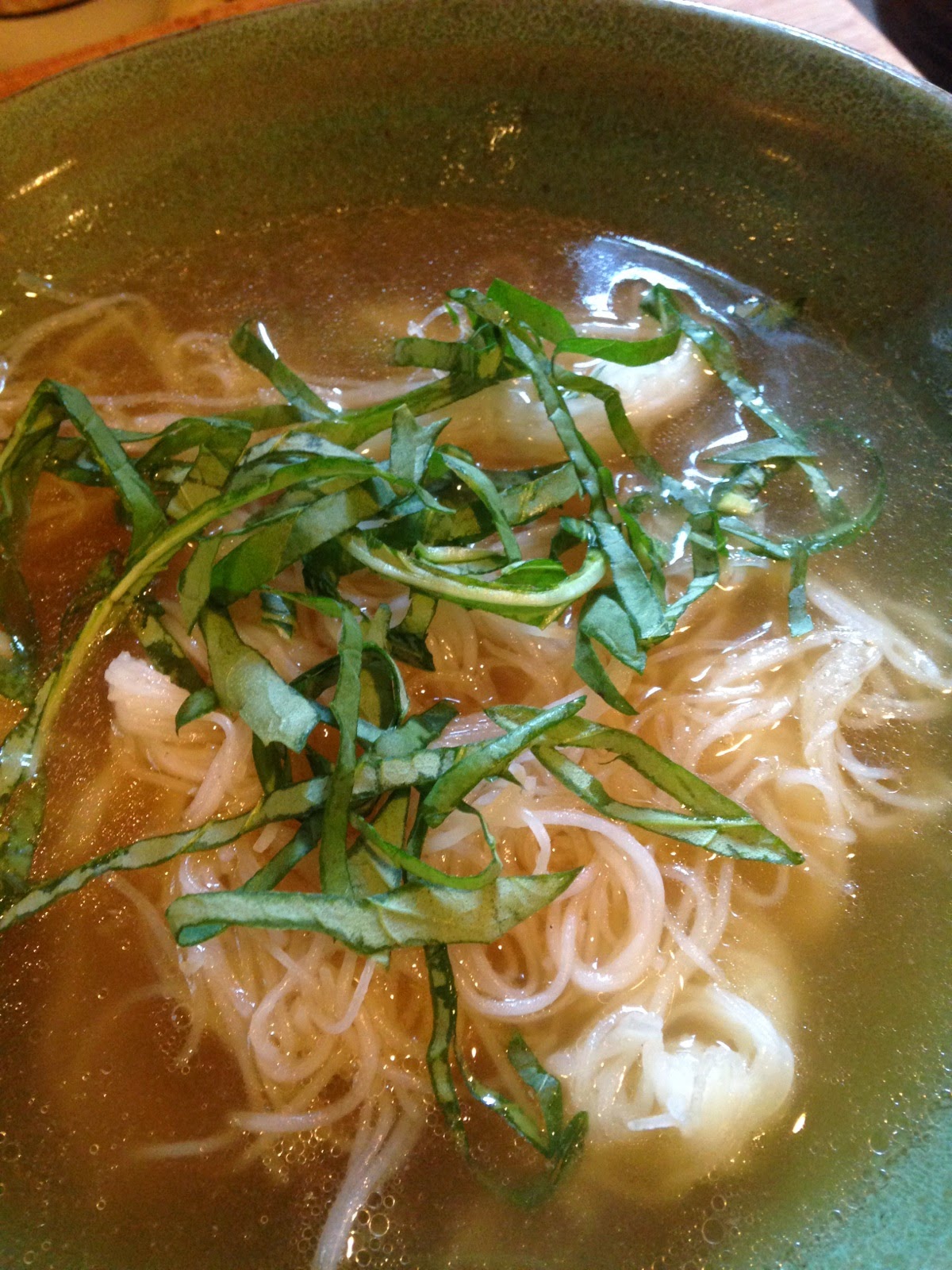 This is the soup the next morning. Quite nice without fussy straining. I also tasted it here before garnishing. The veggies, lime and a small hit of sriracha of course makes it, in my opinion.

UPDATE: Plan so far working. A pint or so of stock, leftover meat, some vegetables and noodles, for breakfast. Should last a week or more, as I slowly defrost the containers of stock through the week. Let me tell you, spicy and sour in the morning is a real pick me up at 5 AM!

Another Update: I think the combo I like best is tomatoes, lime, chicken, chilies, shredded carrots and a few shiitake. It does really make a great breakfast.
Posted by Ken Albala at 12:48 PM 3 comments: 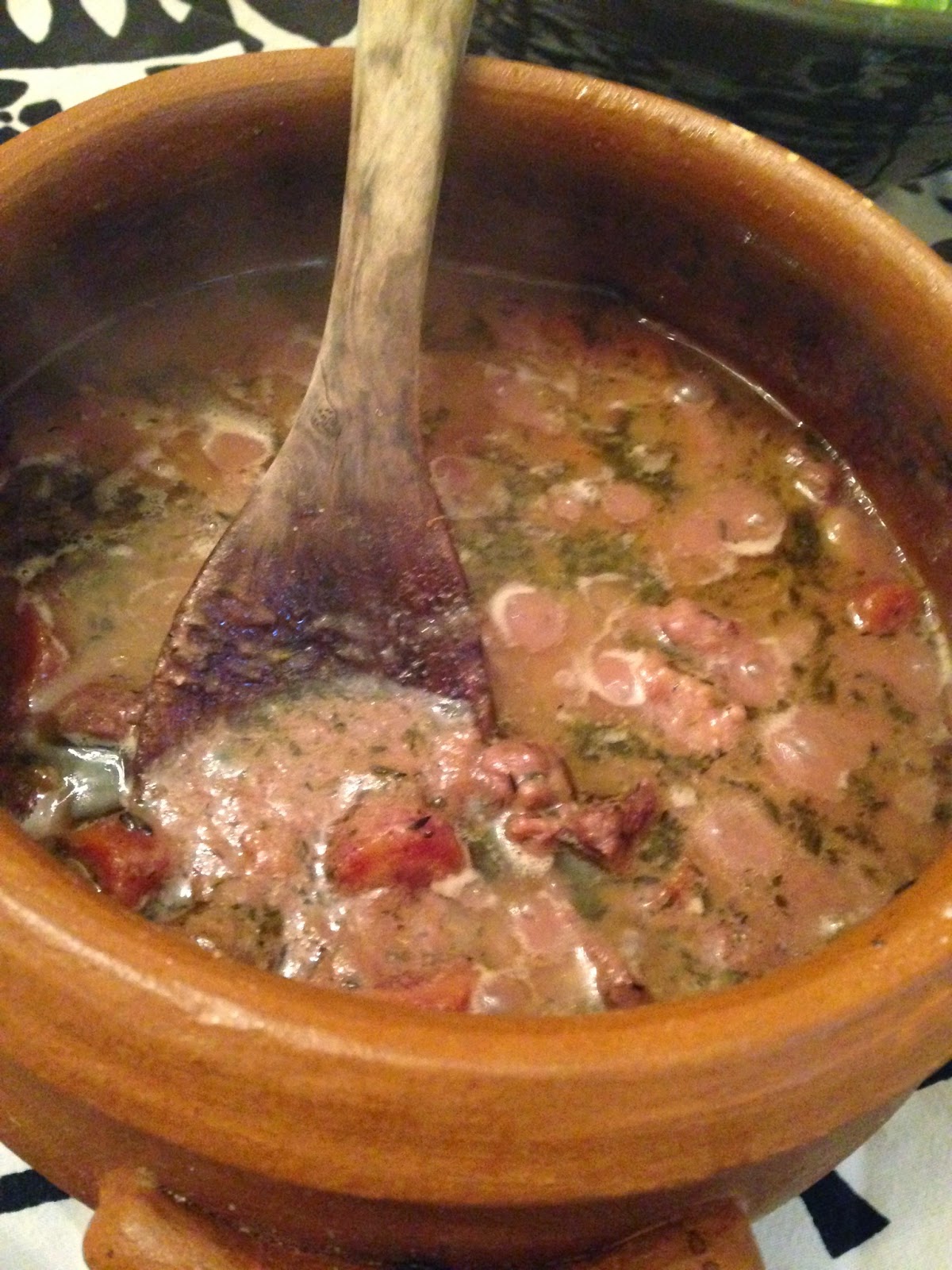 Yesterday I began a long term experiment in teaching food history. It is not only online with recorded lectures, which I've done three or four times before, but now includes a live google hangout meeting every Monday night for the semester. During this time, up to three hours, we will cook recipes from historic cookbooks. Students are organized into teams for cooking in one designated kitchen.The students buy ingredients, interpret the recipes, and so forth, on their own. Most recipes, I think, will come from the reader for the course.

Organizing the groups was difficult, as was dealing with students as far ranged as Paris and Utah. And as I feared, over 9 groups was not possible so one team never got on until one team went off. Worst of all, the google hangout is designed to pick up sound and broadcasts whoever happens to be talking. Now, when everyone starts to chop and pots begin to clang, there is not only cacaphony, but it switches speaker every second or two. It was like John Cage composing for kitchen on computer. I had to make a sign, backwards of course, to say PLEASE MUTE.

Despite these odd disconnects, I think this worked quite well. And nearly everyone said what they cooked tasted good. These were recipes 3,500 years old. The oldest on earth. Cuneiform. We tried as hard as possible to follow the vague directions, and we thank Laura Kelley for glossing many terms that are not translated in Bottero, which has grave shortcomings for cooks. But on the whole, there was nothing odd at all. In fact I think we all learned something about flavor and technique. Most recipes were described as broth. I think a bad translation from Akkadian to French to English. But there are no measurements, so who knows? Mine looks more like a stew.

It's a lamb stew with crushed leek, onion, garlic. And fat, plus flour. Just boiled nothing browned first. Yoghurt (maybe, or sour milk) added at the end. It thickened beautifully. And actually it tasted better after cooking 40 minutes, not after simmering a couple of hours, when I had dinner later. I always thought you couldn't cook yoghurt long, but it was fine.

Most importantly, I think every team liked what they cooked. None were right or wrong per se, but very different interpretations of the recipes. Some were thin soups, some thick black sauces on meat. Which is right, who knows? Maybe none, maybe all. But we all now have an idea of what people liked millennia ago.
Posted by Ken Albala at 5:13 PM 7 comments:

Why I Eat Crap 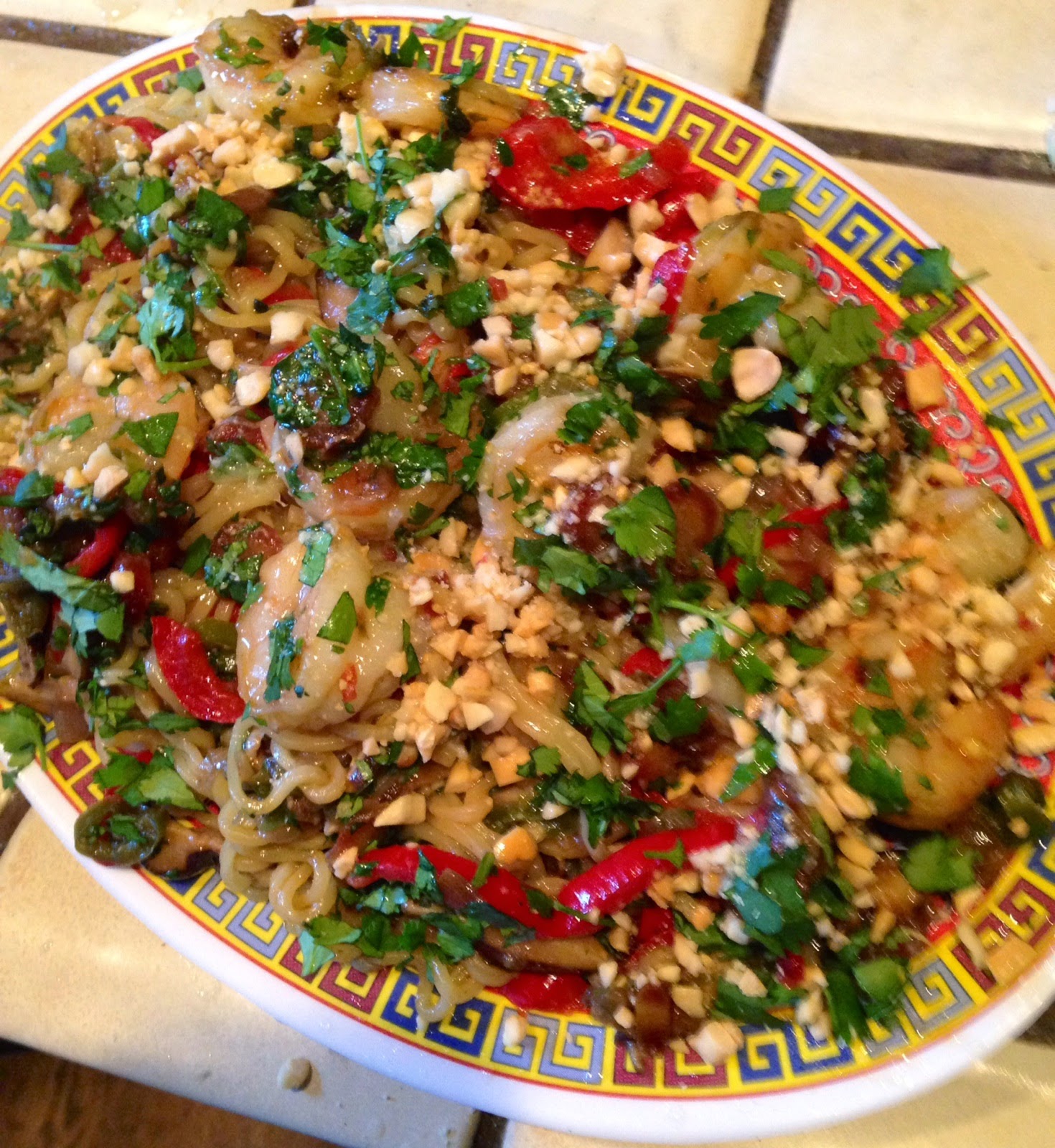 When people see me stuff potato chips in my mouth, get excited about cheap candy or hear that I'm into ramen noodles, they seem so disappointed. As if I would only ever eat the finest fresh local sustainable ethical hand made food. Well, I do that often, but sometimes, especially dinner alone, the situation calls for crap. Despite what it looks like, this is crap.

We all know David Chang put ramen on the map again. I frankly missed it. And I never tasted ramen in college. Really. So I never really knew what was going on. But I do now. At any good Asian grocery you can find hundreds of different ramen noodle varieties. This was Indonesian Mi Goreng. I swear. About a dollar. But as long as you have time why not garnish? All in the garnish, right?

So this was shallots, mushrooms, red bell pepper, green jalapenos, red carrots and shrimp all sauteed in coconut oil. Then the noodles boiled in a broth based on shrimp shells and peelings. All mixed together, hit with cilantro and crushed peanuts. Oh and I used all 5 flavoring packets this came with. Really. That's why it's still crap. But it DOES taste great.
Posted by Ken Albala at 7:25 PM 1 comment: