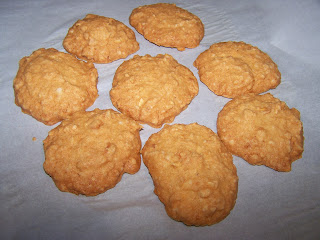 Yesterday I realized that I had pounded up a small dried Indian coconut with sugar for no reason. I also had three egg whites left over after making nog. So I decided to see what would happen if I put the coconut with whipped egg whites and rice flour for some macaroons. They're nice. For some strange reason I tried whisking with my left hand. Know what? It's impossible. That arm has absolutely no muscle memory of having ever done this. And then I took out a knife and tried to cut a carrot into batons. Know what? My left hand is a complete beginner. And I'm starting to really empathise when someone, like my younger son, who tells me, he actually CANT make his own pancakes. Things I take for granted like swirling the pan with butter, pouring batter, flipping pancakes, are simply not things he can do yet, physically. And I assume there are probably many people much like him.

It also occured to me that this is exactly like writing. Some of my students can organize ingredients, put them in good order, and even flip them with a solid thesis. Some have never been asked to write a research paper yet in their lives. They are absolute beginners. And I understand why now. No one assigned a real paper. No one threw them in the kitchen and said, cook. Doesn't matter what happens. Start. Then do it again. And again. Eventually you will know how to write. Or cook. Same thing. Or anything. It's not something you can teach except for encouraging people to do it. I'm beginning to feel better about cookbooks with no directions, and my sophmore history seminar where I have basically just let the students loose and am making them write a full length 6,000 word paper. Like anything, simply doing it makes it possible.

I think I love this post most of all. A great reminder for those of us frustrated with students at the end of the semester. Thank you. I'm heading off to orchestrate a group brainstorming session for the final paper now...with a better frame of mind for it.

you're dead right. practice may not make perfect but you cant get perfect without it.

Anyhow, I going to be your student someday. So stay at BU :-).

Funny enough I met you virtually in multiple ways in the same week I read Rosanna Nafziger Henderson's primer on making Camembert at Food52, and heard about new copy of Fran's book on Food Culture in Sub-Saharan....to see your name again!!!
!
And then, I peeked over at your pottery blog (I am keen to start ceramic pottery, with bold Adire-Tie/dye patterns in a manner similar to Polish pottery, but I digress) and then this evening, I was on the BU Blog when I saw your name! Someday....I wont mind writing a 6000 word essay. Simply doing it will make it possible!

Kitchen Butterfly, Who are you? Write to me directly. I wouldn't be surprised if I don't teach again at BU. They can get less expensive people and teaching from a distance is less than ideal both for me and the students. But know what, this spring my entire food history course will be for sale on DVD by the Teaching Company. MUCH less than tuition at BU.

Wow! Thanks for this, Ken. I have just set my students loose on a long essay assignment, wish I had asked them to cook me something as well...
The epigram for their final essay is a nice verse from a planter about the American peach brandy drinking boys whipping the Brotish beer drinkers!

I like this:
"Doesn't matter what happens. Start. Then do it again. And again. "

A very good resource can do the writings for DigitalEssay.net But use it only if you rly can't write anything down.