Cooking in a Castle in Germany 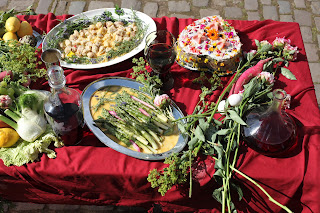 This past week I was in Nideggen, Germany cooking in a medieval castle. It was, oddly enough, for a documentary on the life of 17th century Italian composer Claudio Monteverdi. They wanted cooking segments with food that reflects the same Baroque aesthetic as his music. Cooked in a wood-burning oven and over an open flame. I chose a few dishes, a kind of gnocchi from Cesare Evitascandalo, an asparagus dish from Bartolomeo Stefani, and then a grand veal pie from Vittorio Lancellotti, who was an exact contemporary. Now, you have to imagine this. It is veal chopped finely then pounded in a mortar into a fine paste with sugar and candied citron, plus grapes set inside. This is in a rather sweet thick flaky pastry that is glazed and decorated with flowers. It's upside down here, but heart-shaped. Apart from being totally over the top, it is absolutely baroque in flavor and form. Lancelotti doesn't have a recipe, but it is featured in many of his menus, so reconstructing it wasn't too difficult. The best part was of course watching the crew wince at the idea of a sweet veal pie. But it was quickly devoured after shooting.

This magnificent photo was taken by Claudia van Koolwijk.

That's so cool! It's strange sometimes what is required for just a few segments of a final film.

Well, apparently they said I'd be on screen 15-20 minutes. But they took maybe 8 hours of footage with several cameras. And spent a fortune on food and equipment!

Sounds like the perfect day for you! I can't believe two of my favorite guys were in Germany at the same time and I'm stuck in New Jersey! The veal pie sounds heavenly !

OH Right Joey is in Berlin. How's he enjoying it? I was in Perugia too, which was stunning.

He's having a great time. Although sitting through Die Meistersinger Von Nurnberg was a bit much! He has been enjoying currywurst and other yummy foods!

Is that the ambergris asparagus?? What a great menu you put together... you must let us know when it comes out.
For me, a sweetened medieval veal pie was my first disaster as a cook... I know now I got it all wrong but have been afraid of it ever since... yours looks amazing... it really is like a pastry covered meat loaf, yes? You must give me the recipe.

Sounds like you had a gas doing it, and yes, filming is crazy... often days go into a 10 minute scene. It's all about coverage!!

YES, Deana it is ambergris. I liked that dish so much I had to do it again. Let me tell you, I have a great appreciation and respect for film makers now.

Do you know when and where the film will be available?

I don't yet. I don't even know the title yet! But I'll definitely post when it's available. The producer is Theo Roos.

The texture of the veal is interesting. I know somewhere Claudia Roden talks about mince meats in Middle Eastern cookery being very finely chopped, and I have made meatballs like that-- a very different mouth experience. And the mildness of the veal, and then the sweetness-- and then the sweet/sour of the citron-- a whole different palate. I would love to have tried that!