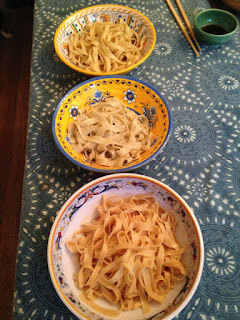 A day playing with the dehydrator yielded these results. One is a purely potato noodle (rather than potato starch). THe potato just shaved with a peeler, sprinkled with lemon to prevent discoloration, dehydrated, ground and mixed with slightly less than one egg. Tastes great and very easy to roll. I was thinking it wouldn't be for some reason.

The other is 2 slices of bacon pulverized and mixed with flour and egg, hand rolled and cut.

The last is a red torpedo onion sliced, dehydrated, ground and mixed into a flour noodle. The idea was the complement of the three in tandem. I could have used sour cream I suppose, but I wanted a nice soy-dashi based dipping soup since it's been so hot lately. Everything is nicely chilled.

And the photo was totally random and unplanned!