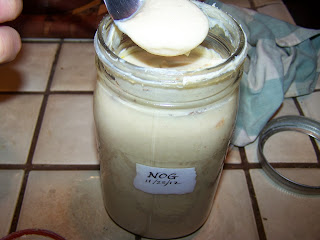 One of the most common questions I am asked about extreme food preservation is "aren't you afraid of being poisoned?" I shrug it off. You know if something has gone bad, and sometimes it does. Throw it out.

But I will admit, sometimes I do scare myself. Case in point: this eggnog I put up around Thanksgiving over a year ago. It's basically just rum, raw eggs, cream, nutmeg, sugar. Left on the shelf. Many others have tried doing this but they always put it in the fridge. Why? Doesn't that defeat the point of a historic recipe experiment?

Then again, maybe people in the past understood something I haven't noticed. Agh. My usual tactic for overcoming that fear? Get really soused at a party and have daring people who will eat anything. That happened at a New Year's Party. Maybe 5 or 6 people willingly tried a spoonful. The verdict. Very boozy, but quite tasty. More like a pudding. I think a bit of milk would make it a drinkable nog, and less potent. But I like it just as is. And chalk one up for trusting old preservation techniques. Now to figure out exactly what I added!
Posted by Ken Albala at 5:55 AM

I am not sure I fully processed the information that it had been "aged" in that fashion prior to reading this post. I know for sure my husband had not. He almost dropped his coffee when I read it to him this morning. But we both agree, it was boozy and delicious--there was nothing spoiled about it.

When Kenny puts something to your lips, just eat it.

I will remember that dear!

Cool blog you got here and thank you for the valuable information. This is truly a great read for me and definitely be back to read some more.

That looks very interesting. I can imagine serving it on warm plum pudding!

This is just the information I am finding everywhere. Thanks for your blog, I just subscribe your blog. This is a nice blog.

Love it! Very interesting topics, I hope the incoming comments and suggestion are equally positive. Thank you for sharing this information that is actually helpful.