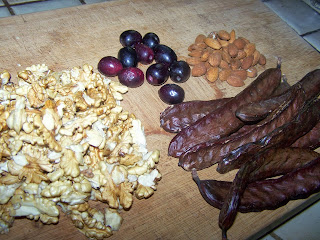 The term urban foraging means many different things. To some, it's anything in a city that overhangs a public street, whoever owns the tree. To others it means dumpster diving. In Stockton, it means finding public spaces where there are things most people don't think of as food. And get them before the critters do. (Though leave some for them too.) This was a bumper year for acorns and I took maybe 50 pounds of huge beauties just down the street at Victory Park. And this day's forage was for black walnut. A huge bag. I'm still not sure how to open them. But along the way there were some nice olives off March Lane. Some Carob on Rosemary Lane. Some walnuts on the levee before you get to I-5. They were so good roasted with cinnamon and sugar. And a few bitter almonds, with which I like to tempt fate. Fall really is nut season. And how nice, one of these days my little book on NUTS will come out in Reaktion's Edible series. I wrote it a couple of years ago now. GRRR. That's my squirrel impersonation.
Posted by Ken Albala at 9:07 PM

When I was a kid in Ohio we used to collect pillowcases full of Black Walnuts. To remove the husks we'd put them in the driveway in front of the garage and roll them around with our feet. Needless to say, there was a permanently black-stained area back there! Then we'd dry them in the basement for about a month and then crack them with a normal nut cracker. I really miss the taste of black walnuts, the European ones don't begin to compare. I salivate just thinking of Blackwalnut ice cream...... Thanks for the memory!

Yesterday I did a bit of urban foraging ... I got some fig leaves in a park and grape leaves from a neighbor to wrap my cheeses in.