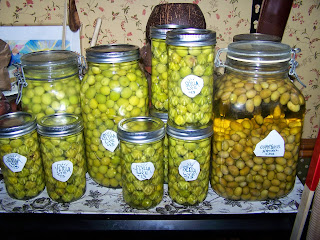 This year's olive harvest was rather nice.  *Yes, my two little trees are named Scylla and Charybdis, because I planted them a little too close on a slope, so picking is somewhat treacherous. Last year almost the entire harvest was devoted to my mad attempt to press oil by hand. Warning: it can not be done. So this year I tried various cures. They have to be picked before they fully ripen or the bugs get them, though oddly that wasn't the case last year when I had some black salt cured olives too. Well, some were cured as I always do: just brine. Takes a year and a few changes of brine every few months. But they stay firm and vegetal. Far right is one tree's early harvest. The other I slashed, soaked in water and brined in Spanish fashion, which is the quickest way to do it. But the grand new experiment was using lye. LET me tell you; scary stuff. And not easy to find, try hardware stores but not Home Despot. Oh, and Red Devil is now apparently called Rooto. Evil warnings still appear on the label. The proportions in the cure were given to me by Megan Brown (see The Cult of Prepasteurian Food Preservation group on Facebook). I doubled her formula using 2 gallons of water and 8 tbs of lye at 70 degrees F. It covered the olives. After 12 hours I drained and repeated. USE GLOVES!! And goggles. Then rinse for 3-5 days with water draining and rerinsing 3 times a day. I was gone the past few days so it was more like a week. Then it went into strong brine. In one quart jar I added lemon peel, spices and chilies for kicks. They already taste good. A little soft, and I do prefer a bit of crunch, but still, so far a real success. Thanks Megan and everyone else in the Cult for the inspiration.
Posted by Ken Albala at 5:02 PM

I've been experimenting with historic olive cures for a few years, mostly from medieval Islamic sources, but a few from the northern side of the Mediterranean. This year I'm playing with a number of Roman olive cures -- several from Columella (1st Century CE) and one or two from Palladius (4th/5th century CE). I'd be interested in hearing your take on the historic origin of lye-based cures. So far, I've only found one historic cure that comes close to using lye: one of the cures in Palladius uses a slurry of wood ash and wine. I'm trying that one right now -- it will be interesting to see what happens. I've also just found a couple of 14th century Egyptian cures that use (mineral) lime. Both are in Arabic, and I'm working on translating them -- a slow process with my very limited Arabic.

In any case, if you have any insights as to when folks started using lye to cure olives, I love to hear them.

Yes, I have tried some of these. Isn't there one in Cato that uses ashes too? In any case, I tried one of the Roman recipes for my last cookbook, but it didn't work. Nor did my attempts to make lye from ashes. So that section never made it in. Which is why this industrial version is my first attempt. They came out pretty good. But I'd love to hear the details of your experiments.