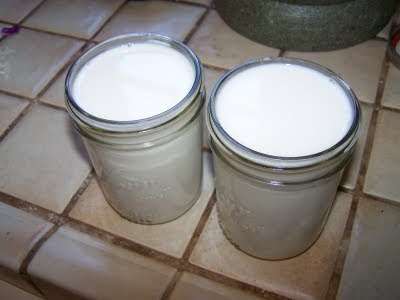 Of all odd things, my wife and I came together on a single odd ingredient this past week. You have to understand, she doesn't eat anything I make on principle. But recently it has gone further: a raw food diet. I'll eat fish raw, meat, love it. Even human flesh. But vegetables in the juicer? 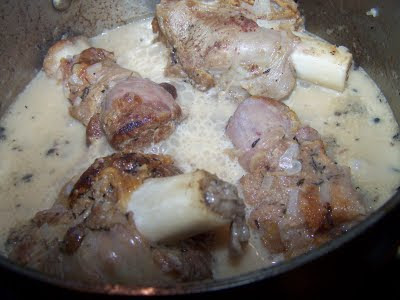 And a never ending string of vegetal mush plates with nuts. They don't taste bad, but I'd shoot myself in the head before I ate only this.

And then I see boxes of almond milk. Horrid industrial pabulum. BUT, it can also be made from raw almonds and has been since the Middle Ages. Then there suddenly appeared raw almonds for about 12 dollars a pound at the health food store, and only 3 at the farmer's market. Must do it.

SO, you soak them over night, peel meticulously, and pound them in a big mortar, pour over hot water, soak several hours and strain, then you get this, above. Exactly like milk. Look closely. And delicious on its own. One jar went into various vegetal shakes. The other into lamb shanks with herbs, pepper, verjus (fresh unripe grapejuice) pinch of sugar and cinnamon. Can you see the marrow oozing out of the bones? Let me tell you folks! The almond milk works much like coconut, and even regular milk. You can also make cheese and butter out of it. OH, those are in the last cookbook. Well, check it out. A fabulously unctuous ingredient, well worth the time to make at home, even if it ends up in a shake.

They are lovely, ken. I've never made almond milk... sounds like a great ingredient to have... does it freeze I wonder??? The only daunting part is the peeling.. I HATE peeling nuts.
Interesting about your wife... I have found with mine, the more interesting the food the less interested the mate. Oh well...more for me!

I agree about peeling. It took me about an hour! But I have never seen for sale raw almonds without the brown peel. They're always cooked, and then it just doesn't work. Especially doesn't work with toasted almonds.

I should know the answer, but I don't; what's the difference between pounding the almonds in a mortar and just tossing them in the food processor? Are you aiming for historical accuracy, or is there a perceptible difference in the result?

Yes Meg, I'm not sure why, but pounding gives you a rich thick milk and the blender not. I don't have a food processor, so I don't know what it would do. But I do think pounding is essential.

Yes Meg, I'm not sure why, but pounding gives you a rich thick milk and the blender not. I don't have a food processor, so I don't know what it would do. But I do think pounding is essential.

Are you aiming for historical accuracy, or is there a perceptible main difference within the result?

When we play the WOW, we need to try get the WOW Gold Cheap,thst's to say, spend less money, do we have any good way to Buy WOW Gold from trust friends or some way else? When we have that we can play the game becomes more quickly and update the levels more easy.

Which cookbook can I find these in? I love the way they look!