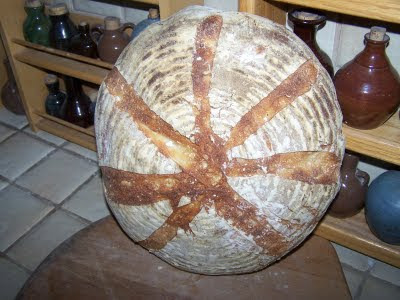 The hidden world of bacteria never ceases to amaze me. A month or two ago my starter began to stink something awful. I know, you think it needs to be saved from 1856. Not at all. So I chucked it. Mostly because I was going to be away for a while and not baking. Upon my return I began a new one. Flour of wheat, rye, maybe something else and water. Then: What is that smell? Sort of like parmesan, and feet. It did take two weeks to finally smell like starter. And then of all things, it is raging lacto leviathan. Raised this baby in less than 6 hours. I normally let it go from 12 -14 hours rising. WHAT?? It is nearly 100 degrees here, but still. That is totally unbelievable for a sourdough. So, to honor today's saint. His name is Peter Chrysologus. Means Golden Word. And The Word is awesome.
Posted by Ken Albala at 5:09 PM

I doubt that more than 1% of the "from starter" demographic uses starter that's more than 6 months old. Starters are so easily contaminated that's it's nearly impossible to keep them going for more than a few months. Starter handed down from "Great-great Grandpa" who cooked it up at Sutter's Mill? Mythos.

Bob, You are absolutely right. Let alone the fact that it just changes season to season and place to place. The story that really gets me is Ed Wood and the Ancient Egyptian starter scraped from slave tombs. Please.

Oh good lord, I just keep getting dumber. Firstly I had never tasted mead and now I still don't really get what sourdough starter is. On another blog they seem to be doing something gross with pineapple juice, and now you are doing gross things in the corner with your feet and cheese.

I would agree that it does look awesome though, although I feel like an American teenager using that word.

Worse than that, Ken, he stood on the balcony of his Hilton (?) hotel room with a bowl of flour and water and let it waft it.

Ali, No feet were involved. It's just flour and water. Every day I add a little more of each and it gets colonized by yeast and lactobacillus bacteria. Nothing to it. Add to a bread dough and it rises. Nice and sour.

Rachel, That was the weekend we first met, in Corvallis! Over a dozen years ago, wasn't it? I'm going back this fall and really looking forward.

That is one perfect loaf. I really must try starter again... I guess I got put off by that feed and toss system... I hated the idea of wasting soooo much flour... just seemed wrong.
How much do you keep going on the counter?

Lovely bread, indeed, Ken. A question, tho, regarding the whole "throw your starter away/keep your starter and rejuvenate it" issue.
Last summer I heard a talk by Jeffrey Hamelman, in which he recounted the story of a culture in his bakery getting contaminated somehow. The bakery intern was all for throwing it away, and Hamelman insisted that, no, that's not how you do things. He fed it back to health. I didn't have a chance to ask him why. I got the sense, though, that, in his case, it wasn't mystique. Perhaps it was something like "bakery culture," i.e. the notion that you don't throw something away just because it's not working right.
At any rate, I'd be interested to know if anyone has more to say about this.
BTW, Ken, if you do want some of Durga, "your original culture" again, I can dry some and mail it to you. Of course, Durga's personality is rather different, now that she spends time in Minnesota and Maine. (And yeah, she behaves differently in a Maine summer than in a MN winter.Wish I were more systematic, so I could document some of those differences.)

That's one bee-you-tee-ful loaf. What does that baby weigh in at?

Folks, I naver throw anything away unless it really goes south. I just add a little flour and water every day and if I bake once a week, the bowl never gets too full. I maybe use a third of it for the next bread. Plus water, salt and more flour. That's it. This guy probably weighs 5 lbs? And will definitely last all week. And if there's any leftover, it becomes bread crumbs.

Ken, don't you think that fast rise was because of the heat? At 100F that's extremely warm for a normal rise.

I gave up transporting my cultures..they kept exploding, or the bag broke or some other dramatic mess. I live a nomadic life, and I think I've figured out why nomads like flat bread: they got tired of cleaning up yeast explosions.