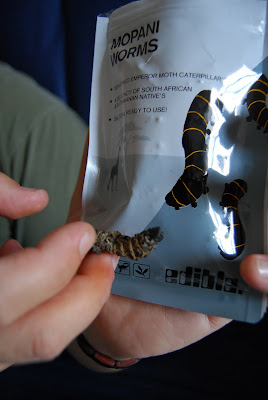 I am of the opinion that if there's anything you want from pretty much any place in the world, New York is a good bet, or often even better London. People from every corner of the former Empire, which means most of the world. I spent this past week loitering there, mostly eating pork scratchings (aka cracklings) astounded by places like the Borough Market, the Ginger Pig in Marylebone, Neal's Yard in Covent Garden, etc. We are talking serious food here. But who could guess at the stodgiest of all revered old purveyors - Fortnum and Mason - I would find these for sale? You've all seen the commercial right? The white guy gives the South African couple some chicken to taste and he says, "tastes like Mopani Worms." Well, it doesn't taste like chicken, at least these were hard and crunchy and salty. If they were fattier I would say they're not unlike pork scratchings, but that would insult the Pig Gods. Let me say, these worms were tasy, interesting, and I hope if you see these for sale in your locale, try one. Look closely between my fingers to see what you're in for. But the flavor and texture was quite pleasant.
Posted by Ken Albala at 3:06 PM

You know the mythical dinner party where you can invite 6 people - dead or alive?

they must have been better prepared than the ones i had in south africa that tasted like dried out shrimo. have a picture of them in a basket in some touristiy tribal village. will send it to you if you are interested :)

Ali, Someday I hope to take you up on that offer. Who are the other 5?

Hi Ken, My name's Michael. I'm trying to find some of these so I can taste them. Can you shoot me an email letting me know where I might be able to order them?
TrulyBB (at) gmail (dot) com