Even though the sound of it is something quite atrocious, I couldn't resist when I saw it in a sausage making catalogue. I was frankly taken aback when I noticed one end is closed. How does the ordure go through then? I need a little bovine anatomy lesson, I think. 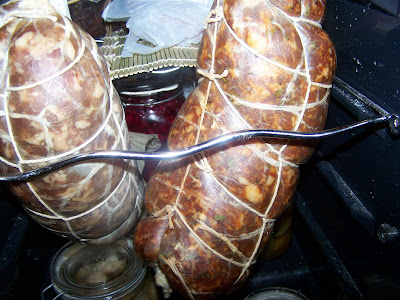 In the meantime, we have serious massive salame. One weighs 3 1/2 pounds the other 5. Luckily I have gotten quite proficient at cutting up pork shoulder with a Chinese cleaver. The key is being semi-frozen (the meat, not you!) and a really sharp blade. The thinnest cuts are a breeze. It took me maybe 20 minutes to cut then chop all this into fine pulp. And no funnel is needed, you just put it in by the handful. Takes 30 seconds. Into the smaller is a combination of salt, maple sugar (which works very nicely for the ferment, easier to break down than regular sugar I think) with sage and thyme. The bigger is picante. Here's the proportions: 3 tbs maple sugar, 3 tbs sea salt, 1 tsp instacure #2, a tablespoon each of chipotle powder and smoked pimenton de la Vera. And on a whim a good handful of tarragon. I was thinking Spain I guess. The best part was tying them up! Seriously.

The cost is really pretty reasonable. The pork was $2.99 a pound, times 8 1/2 lbs of pork, about $25. The bung was $10. So $35 for what will be about 7 pounds of salame after drying is about $5 a pound. Not bad at all, considering real cured salame is around $20 or more. And if I had a bigger "cave" I bet I could have used the whole bung and fit at least 10 lbs of meat in it. Someday. Actually I'm thinking a huge mortadella.

PART II
The first image was non-descript and white, so I replaced it with this one. After 24 hours, it is a stunning deep red. Not only did I find the lovely word cul-de-sac, which is what the caecum means, indeed an opening on one end only. But even better, I learned from Joan Alcock's paper for Oxford on sausages that the ancients had a word FUNDOLUS, in Varro especially, which means blind end, dead end, only one opening, The Very Same Bung Sausage Indeed.
The most amazing thing I've noticed after a day: you can clearly see the string support system that I tied. But the beeves have their own internal suports too, beaneath the casing, if you look closely. and nothing to do with mine. Beautiful I think.

Ah, apparently it is the caecum, or blind gut. Because it has no exit. Not the large intestine itself. But best of all in French it is the cul-de-sac. Absolutely!!

Oh no,je ne mange pas de porc. Just kidding. I'll have to come for a visit if you make the Mortadella. I love it real thin with the pistachios. Those bungs look a little scary.

You are a brave soul. Not sure I could tackle this.

I was in your kitchen yesterday and saw the jar on the sill...it reminded me of the old "generic" packages from when I was a kid, a white plastic jar with black lettering announcing, simply, "BEEF BUNG."

Who really needs more explanation than that?

Kristine, Next time I get a bung, I'll make sure you're around. You could stuff a whole big cat in there, or put it over your head down to the waist at least. Oh, the possibilities!

I've worked with bung caps before - they are so wide you will need to watch your humidity like a hawk or risk case hardening. They make really impressive salami, though...

Impressive. My mom created sausages in a similar method, hand chopping the pork with a cleaver and stuffing the casings by hand, and then cured them for weeks. It's quite laborious, but I still remember how good they were. I'm sure these two are going to turn out well.

I love eating beef because is so tasty.q

oh my gosh. a decade ago?