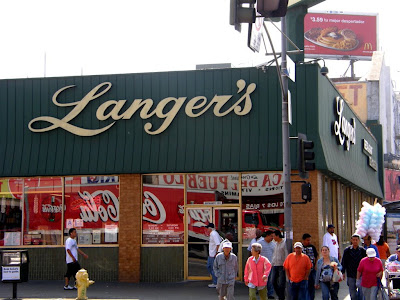 This is not exactly a charming neighborhood, but I was committed to tasting what has been touted as the best pastrami in the country during my recent trip to LA. All, of course as a prelude to making my own pastrami. My pals Andrew and Damon facilitated the pilgrimage. 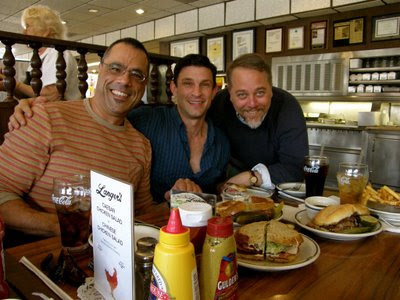 The interior, as you can see is vintage 1975. The real thing, not touted up or reinvented. The waitstaff were original (see upper left), the banquettes, plastic coated menu, and even the nice Jewish man who took this picture for us. He self identified as such, even though I suspected he was paid to sit there to lend authenticity. We tried the brisket, corned beef w/ sauerkraut and the famed pastrami. Fries came with, and I had a cream soda. 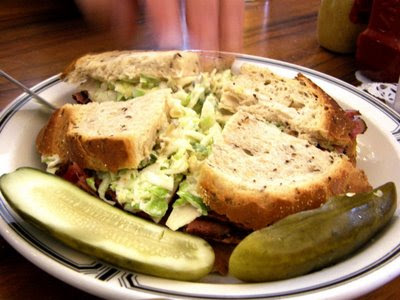 Here is the sandwich, drawn and quartered. The coleslaw, I must admit, threw me a bit, and I think it would have been better without it. The pickles were a little younger and tamer than I like. And the whole maybe a little too soft and yeilding. 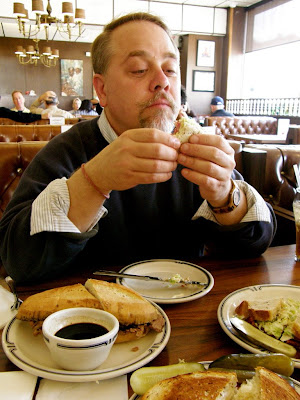 Here I am scrutinizing he contents. I have to admit, on it's own it is quite possibly the best pastrami in the country. Maybe the universe. But I saw no Martians. 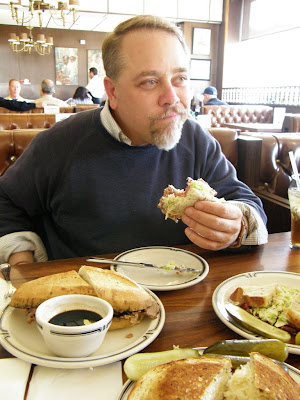 Ok, it was indeed pretty damned amazing. But here is what I intend to do differently. I'm not sure if the meat was smoked or not, but I think it should be. This was not terribly different from the corned beef, which as a sandwich was actually superior. I am a toast freak, and I love sauerkraut. So that's what make that sandwich work. But if you took pastrami, on toasted rye, a little more sour and not so soft, and left off the cole slaw, added mustard instead. Nothing else. Then I think it could rank up there among the celestial blessed sandwiches. Samachisa bootifa, samachisa fine, I like samachis, I eat them all the time. I eat them for my dinner.
Stay tuned.

Ken, nice to put a face to the blog...connects with your readers more. HERE HERE to kick-ass pastrami!

Seriously, my mouth is watering. You've just described my idea of a perfect sandwich.

Peter. Yes Pastrami must kick ass if nothing else. Or add to ass. I am with you there.

Syd, I wont even comment on your watering mouth. Well, maybe in private.

Nathan, Are you talking about Pittsburgh?? Never been there. But I have eaten a lot of NY pastrami. The usuals, Katz's, Carnegie, etc. All pretty damned good too.

Kryssie, YOU are the only one! On this topic and in general.

Hey there, Ken - Looking good!
I'm convinced that the most kick-ass of anything doesn't come smartly wrapped... or live in a pristine neighborhood.

Whether 60 or 16, there is in wow gold every human being's heart the lure of wonder,the unfailing childlike appetite for what's next and the joy of the game of living. In the center of Runescape Gold your heart and my heart there is a wireless station: so long as it receives messages of beauty, hope, cheer, courage and power from men and from the rs gold Infinite, so long as you are young.

When the aerials are down, and your spirit is covered with snows of cynicism and the ice of Runescape Gold pessimism, then you are grown rs gold old, even at 20, but as long as your aerials are up, to catch waves of optimism, there is Runescape Money hope you may die young at 80.