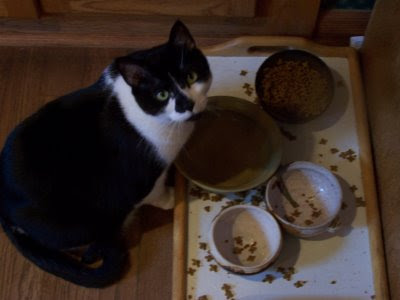 I got to thinking just now, after reading a little facebook message from Warren Belasco about how his pets might influence his writing habits. Interesting idea. Sure, typing accidents. Random inspiration. Then I came home. Sadie asked me for dried Japanese Cuttle Fish. Seriously. She asks for it in Japanese. Since I don't speak Japanese I assume she's saying it correctly. Mi'aou-ah. I shared.


But this then got me seriously thinking. This here is Ray Bolger. When he was a kitten, he looked just like the Scarecrow, danced well too. He came into my house, started eating then and hasn't stopped since. But take a look at what this beast is doing. 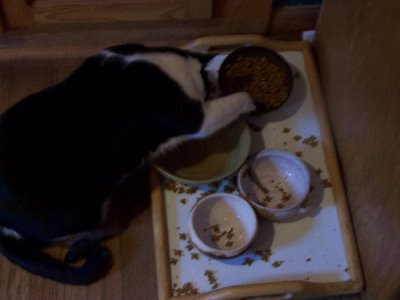 He actually scoops his food from the bowl. Messily, we admit, but usually lands it right into the water bowl. Leaves it there for about 10 seconds, decides that it's soaked enough, and deftly scoops it out with his paw and puts it daintily in his mouth. 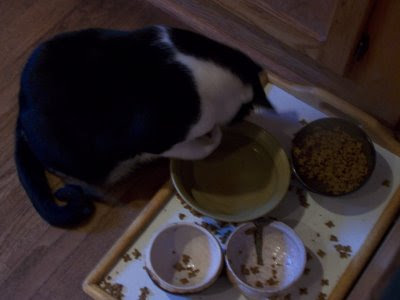 Unlike the other cats, he eats nothing but this. And has a such a strange ritual that no one could possibly have taught him, I think we should seriously be thinking about food culture beyond the parameters of our own species. Obviously, he shares this with no one, but decided on his own weird preference, and insists on dunking. And has become masterful at it. Don't you find this perplexingly thought-provoking? We assume society gives us our eating habits, but here is something he shares with no other cat or human in the house, and figured it out on his own.

Looks like Ray is part Procyon lotor, just like my boy Bock. Bock will only drink from his own paw, too. He is civilized.

We have a paw drinker at our place too. Very civilized indeed... except that he drips water everywhere. He's fortunate that one of the younger cats comes over and cleans up after him!

We have a paw-drinker, too. And our corpulent cat is overly fond of game birds we cook, but hates red meat. Paw-drinker despises fish and will eat pheasant heads, but ignores duck heads. Go figger.

i so love this post... i have 2 cats. they daintily drink from the bowl. i've never seen a paw drinker or dunker but i'd like to, you eed to video this one....

I thought I had the only paw drinker! Speaking of paws: Italians think we are barbaric not to think of the front two 'paws' as hands.

When I was but a kitten myself, our cat, Shasta, would come in daily for her saucer of milk. If it was heated, she'd drink it the way cats typically do. But if it was straight from the fridge, she'd drink it by dipping her paw and licking the milk off of it. Every day for about 15 years, this was her ritual: Size up the temperature and then drink accordingly.