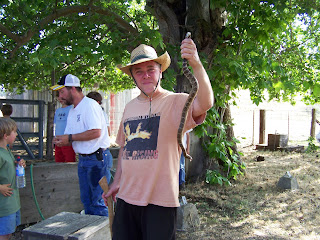 This past Saturday, camping at a ranch way up in Glenn county, an impressive rattle snake was found just a few steps from my tent. Paul, standing behind me, who comes equipped with a "snake stick" decided it would be best to remove the beastie with children around, snagged it. And let me dispatch it, with the axe here depicted.
I also had the honor of cleaning her (as it turned out) and apart from the disconcerting writhing of its body after decapitation - its headless form struck at me when I removed the rattler - it was pretty easy to clean and cut into segments. can you imagine how much meat there is on a snake of this size? Roughly 6 or 7 little chicken wing nibbles. And I wont say it tasted like chicken, but it was pretty good as long as you were willing to crunch through the tiny rib bones. Lightly sauteed in butter with nothing orethan a little salt and pepper. I'd recommend it to anyone.
We also did fishing this weekend, large mouth bass, but through them all back. Either that or it was the same fish each of us caught in turn. At this spot - a beautiful pond - we also saw a little troup of wild boar, and had I not been seriously hung over, I would have considered chasing them, and taking down one of the juicy little piguoles with my bare teeth. Ah, missed opportunity!
But mostly it was cows, huge lumbering black beeves, the leader of whom bellows a most pathetic doleful caterwaul, and they follow, randomly, over literally several thousand hilly acres which they pretty much have to themselves. I had a taste of one last night. Quite nice, grass-fed.
Now just so you don't get the impression that this is the sort of thing I do all the time, the camping food story in the last post and this one were separated by about 3 or 4 years. Wildman Gourmand I am not. I'll have to post something totally civilized and extravagant next.
K
Posted by Ken Albala at 4:01 PM

Just whacking the slices once with something big and flat (the bottom of a pot, a cast iron pan, what you will) has kind of a remarkable effect on the muscle: It sort of relaxes and becomes pliable but resilient, the perfect toothing texture. But if you then pound once again, it siezes up and you must pound again and again until it gives up all resistence. Butter and fire, surely, not even salt for the briny muscle...wonderful dusky food memories from before this food of gods was delegated to its possible rightful place as pelican fodder. Razor clams a close second and they are such fun to chase.