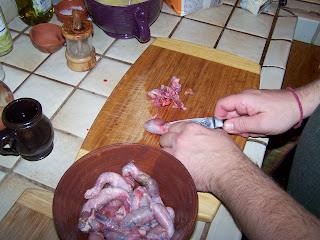 Can you guess what these are? My friend Paul mentioned that they were castrating calves on his in laws' ranch, so I said bring 'em on over. I didn't realize that they require yet another surgical procedure to render them palatable, but here I am removing a tough membrane. Then they were simply breaded and deep fried. I am certain that even cardboard would taste fine breaded and fried. These were pretty much like any other garden variety giblet.

Everyone had a taste, including my young finicky sons, and one of their friends Innes, the human hoover, who sucked down a few dozen, undaunted by their origin. They were, in all honesty, fairly tame.

The odd thing is that this weekend we are going to this very said ranch for a hootenany. Neighborhood dads play in a band. We suck, but it's fun. But the question is, how do I approach these beeves? Do I apologize to them? Thank them in person for a nice snack? How often does one get to thank a creature for sustenance ex-post facto? It has given me a mild existential pang of conscience. Not for having cooked and eaten their balls, but facing up to the living steers themselves. And it is also so perversely timed, while some of these said dads have just or are about have vasectomies. I know, not the same thing. And no is is eating them. But why all of a sudden, out of nowhere, have balls become the topic of conversation?

Hello Ken!
Nice blog & vive les "prairie oysters"! I am from the Pyrenees and we do eat the lamb testicules, sauteed (1/2 butter 1/2 oil with a generous persillade) We call them "tountous" in Occitan-Gascon....one question thought:
the lamb ones are much rounder, has are the chicken & the duck ones (those are delicious , I served them as a "three olives brochettes"( a black olive, a green olive & the testi as the "white olive". Anyhow if I eat them again this summer when I return I will take a picture and send it to you.
Adichatz!
nicole peyrafitte

Rare delicacy I love it look so tasty.

I am not sure if you are a believer in the Almighty, maker of Heaven and Earth. If you are, I would like to make you aware of the following that you do not know. Have a good day.

Eating the Limb of a Living Animal

The Prohibition against eating the limb of a living animal sounds like strange commandment. It is not only a mitzvah that Jews were commanded, it is one of the seven universal (Noachide) laws that all of mankind was commanded after the flood; a commandment that will never be obsolete. The reason for this is similar to that for the prohibition on eating blood: when a limb is severed from a living animal, it still contains the animal’s life force. This is also evident in the verse stating the prohibition to Noah: Flesh with its life…you shall not eat (Genesis 9:4). To eat a limb torn from a live animal is unspeakably cruel. Since we are what we eat, eating such a thing only reinforces the trait of cruelty.