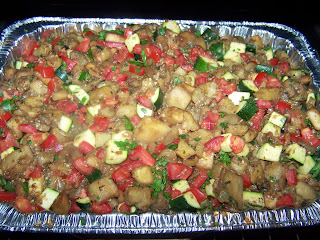 It is difficult to fathom the vast gulf separating home cooking from large scale food preparation. Every now and then I offer a lecture/demo/tasting that requires cooking on an extraordinary scale and I am always astonished and exhausted afterwards. The gig is downtown Stockfish, at the Cesar Chavez Library, tomorrow (Monday) at 6:30. DO come, it's free. I'm talking about Antonio Latini's Lo Scalco alla Moderna (1692-4) and cooking three recipes. One of which is among the first three recipes ever printed for tomatoes. It's a minestra alla molignane - or a kind of eggplant stew with squash, onions, tomatoes, spices and oil. That's about it. Oh and verjus. Normally I would sautee the eggplant and onions, add the tomatoes and parsley, etc. And let it cook for half an hour or so. It's sort of an intriguingly spiced ratatouille or version of caponata. But this version is 11 big eggplants, sauteed in 11 separate batches, then a pile of onions browned, then then a big bag of tomatoes and then zucchine cut up and it is now in oven for a few hours. It will be great at room temperature tomorrow, for a crowd estimated at about 50. But this took like 2 1/2 hours just in prep work. HOW do people cook in a restaurant?? I think everyone should try something on this scale just to appreciate the labor involved.
Posted by Ken Albala at 2:42 PM

Ken, I believe cooking on this scale is supposed to be a joint project. Whenever I have to do it, I want to scream: "WHERE are my minions???"

Ken, whenever I cook with my restaurant chef daughter Sara I am astounded at what she can do in a limited period of time. A special lunch that takes me a day and a half to prepare, she whips up in a couple of hours. I wrote about this once in Food & Wine because it so stunned me, what happens when children surpass their parents in things the parents believe they do rather well. But I also think you learn all kinds of tricks of the trade in restaurants that we poor home cooks never understand.

I would love to taste it! Judging from your description though, it sounds terribly modern.
Yes, cooking for large crowds is a huge deal and not for the faint of heart. I have done it a few times and it took so much longer than I would have thought. I was lucky that I had extra time or it would have meant an all-nighter.
Hope it's a great success!

I've helped with a few medievally-themed feasts (and am in the throes of planning another one)and the secret for me is to be willing to forgo any spontanaety and creativity while doing the actual cooking. Everything gets planned down to the last burner and pot, and you have people that you can absolutely count on to do their part.

When we weren't able to do that (such as the time we were basically told "You have three goats, go have fun")...we certainly had fun, but it was a lot more exhausting, because we weren't quite sure what we might be doing, even though we'd brought recipes.

Glenn, I did plan every single spoon. But it still took forever. I guess because I was just cooking on the scale and how I always do, just 10 times over.

I totally agree! Well cooking in large batches is really tiresome and because of the large batches there's allways a case that even your simple gourmet recipes will taste different from like a 4-6 serving.

This is the problem most people have when they confront Thanksgiving. Instead of two sweet potatoes they find themselves mashing twelve; instead of chopping one onion for stuffing they face a couple of pounds of onions. It's not harder--not at all--but it takes so much more time. Not to ignore performance anxietyl

Wow GREAT job on this! Well I hope I can share it in my blog at http://foodsuncovered.wordpress.com

Thanks for posting the full details,its really a good information
veg manchurian recipe