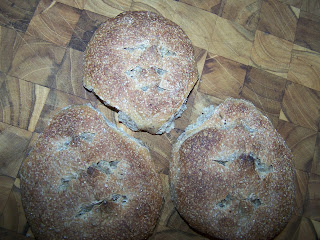 People are often surprised when I tell them I mess up all the time. They ask, "Don't you test your recipes several times until they're just right?" No, I really don't. And even if something does turn out fantastic, I never write anything down and rarely remember exactly what I did. In fact I rarely do anything the same way twice. What would be the fun in that? Even if it's a routine dinner I try to do something slightly different. It's almost never inedible. But sometimes something goes seriously bad. What can you do? Say oops, try again.

Even more surprising is when something I fully expect to work doesn't or when something turns out really interesting that I am sure is bound to fail. Witness these bread rolls. They were made for a film demo this past week, from hand ground whole red barley, sourdough starter and a touch of salt. I just left them in a springform pan overnight and baked them the next day. They are dense, but have an unbelievable flavor, sour and sweet and crumbly rather than chewy. With butter they will be amazing. I think they got wind that I was about to chuck them in the trash. Look at the expression on their faces. Bizarre, isn't it?
Posted by Ken Albala at 12:49 PM

Ah, there's more along these lines in this interview. http://www.thekitchn.com/ken-albalas-5-essentials-for-home-cooksexpert-essentials-181614