Pickled Bologna, SO from scratch 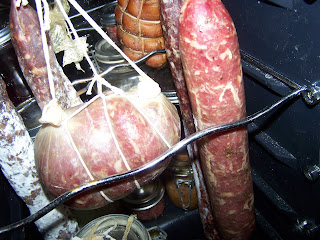 The very idea of a pickled bologna leaves me giddy. I've never eaten it, but it has to be good. Apprently a thing Michiganders eat from a jar with beer. So I decided to make it. Of course utterly from scratch. These babies up front are several pounds each. I honestly don't know how people made proper mortadella before the advent of machines. I beat the flesh for nearly an hour with a wooden bat. Seriously. And it was definitely smooth, but not utterly emulsified. Maybe it never was in the past. IT's close enough, I hope. One is in a half a bung the other in a beef middle. Very mildly spiced. I am going to let them hang just for a few days. Then cold smoke. Then lightly poach. Then submerge in a briney vinegar with spices. To be eaten cold and sliced. If that doesn't sound divine, I don't know what possibly could. OK, on sourdough with mustard. Rock On Bologna!
Posted by Ken Albala at 8:44 PM

Please let us know how it comes out. Inquiring minds want to know!

rock on indeed- add a sliced watermelon radish with a pinch of salt... xo to you and your many projects!

Hey Ame, You're writing in the middle of a hurricane!! Everything OK I hope?