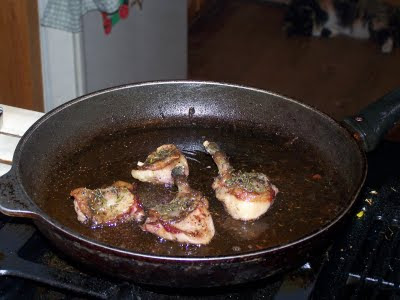 The scenario is now familiar, so too the modus operandi and dramatis personae. First I get a call from Christine. An hour later she shows up bearing some species of wild animal, which is then cleaned and dressed, as hoodies start showing up to help. A lot of bourbon passes lips and suddenly the whole neighborhood is crammed into the kitchen eating directly from the pans. I would have it no other way.

If I had planned for a minute there would ahve been something to go with it, but nope, just ducks. Ten of them. Ranging in size from a mere fistful to barely game hen. My first thought was panic. I tried calling Hank, expert in all things wild duck, but no answer. Are they widgeon, widget, teal? So we decided to "wing" it. They were actually very easy to pluck. Just as easy to eviscerate. A few I took apart to cure, then a few breasts and legs went immediately into a pan with rendered fat, and they were very fat. Everyone agreed this was the best, just barely pink. Some were roasted, some pan sauteed and chopped crosswise as Chinese chefs do. They were frankly delicious, dripping with fat, as fresh as food gets.

What beautiful food that was. I am adding thanks for the man who gives me confidence to bring over whatever just got shot, stick my hands in it, pull out the guts and EAT!

So I still have the two ducks broken down and being cured. I'm going to slowly cook them in duck fat and put them up as confit. So there's more to come. Thanks my dear!!

What a thoughtful, fun blog. It not only sounds delicious, but it's a wonderful mix of the modern and pre-modern in cooking. Add some greens from the garden on the side!

Hi Ken, not only did I bookmark this mouth watering post. I shared it with my visitors today. I hope you don't mind. Come see when you get a chance.

Wish I lived a little closer to you! That sounds amazing. A hunter friend has promised me a mix of different water fowl for sometime in January. I can't wait.

Sorry Ken! Never got your call! I'd say you did pretty well all by yer lonesome, though. Ducks are even better hung for 2-4 days before plucking...

Heh. Before finding your blog, I'd never wanted to actually LIVE in Stockton before...okay, truth be told, I still don't, but I can see it DOES have advantages.

Now, if only my brother-in-law had the skills of your Wild Game Goddess...

Hey Glenn, DO you actually live here?? Foodwise, Stockton is not a bad place AT ALL to live. No restaurant scene, but the ingredients are fabulous. And if you grow food, spectacular.

Kenny, Glenn seems to have the impression that the goddess of game has hunting skills...maybe he should know that her only hunting skills are the womanly charms and wiles she lavishes upon the hunter, which results in magically filled game bags.

If you think you have what it takes to charm a hunter, goddess-style, then have at it.
But you may not have to. The serious point is, if you live here, I guarantee you know someone who hunts something. I think hunters often get "Ewww" reactions from non-hunters. Display your authentic interest when your neighbor comes home in camouflage and has blood smears across his chest. Hunters I know are generous about sharing the fruits of their labors and are equally generous (and, very entertaining, I think,) with stories about how they obtained your food.

No, I'm actually up in Paradise (up next to Chico). If I actually lived down there, I'd probably have followed my nose, and you'd see me out on your lawn looking soulful, drooling.

And, oh mighty Goddess of Game, it matters not WHAT method you use to ensure the meat hits the pot, only that it seems pretty reliable. I have a 'Y' chromosome instead of a secopnd 'X', so your 'goddess' skills probably aren't transferrable to me, more's the pity. My brother in law just doesn't have the...accuracy to bring me marvelous treats, the way you bring master Ken, here.

Though he did say he has a few pheasant hiding somewhere back in his freezer. Surely he needs the space freed up, right?

A good book is Runescape Money often the best urn of a life Runescape2 Money enshrining the best that life could think out; for the world of a man's life is, for the most part, but the world of his thoughts. Thus the best books are treasuries of good words, the golden thoughts, which RS Gold, remembered and cherished, become our constant companions and comforters.


Thank you for any other wonderful article. The place else could anybody get that kind of information in such a perfect way of writing?
I have a presentation next week, and I am at the look for such information.