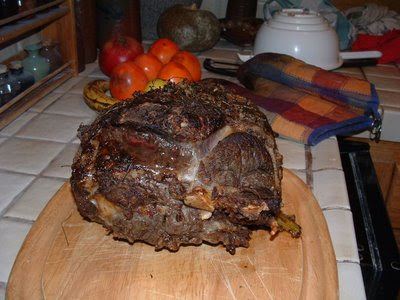 that is too cool. i cannot wait for heather to see this.
really interesting and very cool.

Jesse, I am fairly certain the feeling would be mutual for the bear. Wow, taken aback myself.

Hope you're enjoying Oxford. It really is a great food town, go check out the pies at the covered market. There ae some amazing things for sale there. Have you been to quod or Loch Fyne yet?

This is exactly what I would have guessed a bear's butt looks like. It is a subject on my mind since I first read about arctophagy in the Little House books.

Tell me more about this bear! Was it a root-and-berry sort or did it feast on salmon? I'd hazard it was a berry-eater by your description of its meat. Perhaps it even ate Arctostaphylos uva-ursi (yes, I am outing myself as a botanist with a penchant for punnery).

Heather, just a little whiff of binomial nomenclature in Latin and I get all horned. And I have always loved the word uva ursi. Bear Grapes. What does arctostaphylos mean? Could it also mean bear grape? That's redundant.

Anyway, yes, a bear grape bear. A bit elderly with greyish muzzle, and female. I know, that's disconcerting, but I thought better someone ate her after being shot than otherwise. Wanna see a picture of her face? Let me know.

Gawd DAMN, Ken! You have now eaten something I have not! I've never eaten bear meat or wanted to hunt bears because a) they look like humans when skinned, which I find more than a little disconcerting; and b) their flavor can be immensely dodgy depending on what they ate (Heather is right, salmon-eating bears are stinky, awful wastes of bullets).

That said, there are bears that reportedly pillage the avocado groves of Ventura County -- state record bear was shot there -- that's the one bear I might hunt...

Dude, I sure didn't hunt it. Her head is in my next door neighbor's freezer if you want a gander. Unless he's buried it. All he wants is the skull for his bio classes.

Anyway, I still have the lower leg section if you're game. Well, it's game, I guess. Might make some neat osso bucco. It did taste really good.

I saw bear foot stock being made once. It looked like a human foot in the pot. I actually don't remember if I tried the soup or not, I was about 5 years old.

We Are Never Full said...

i have to thank heather for introducing me to your blog (and books). anyone that raves about bear butt is great in my book.

Why is it that eating dog in America such a crime and eating bear is not?

For those of you who purposely hunt bear for their meat, would you ever consider eating dog meat?

All I can say is Jesse's face has gotten more hits on my entire blog than anything else. Are you still out there Jesse? We need to capitalize!

yummy butt! I think suits for men is good to your look.